Our Hospital, Our StoriesLeading With Legacy 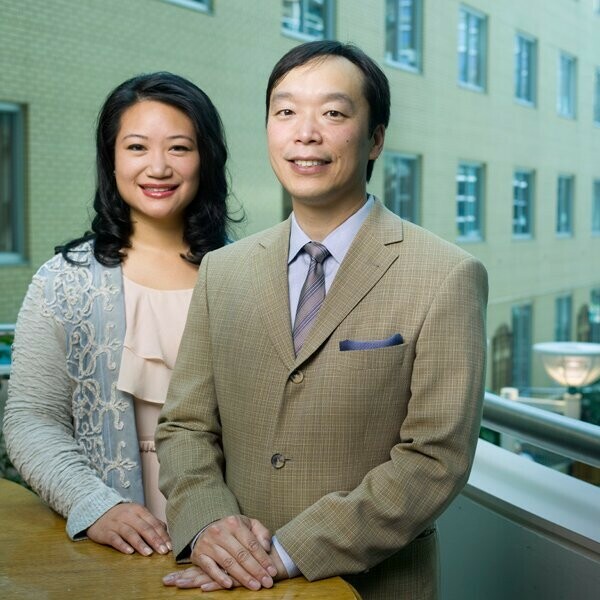 Natalie Nakatsui is 10 years old, learning Mandarin, and reading her father’s old science fiction novels. Her father, Thomas, is a dermatologist in Edmonton, and her mother, Melanie, is a well-known volunteer with organizations like The Works Visual Art Society and the Royal Alexandra Hospital Foundation, the latter of which she joined after Lynn Mandel asked her to become involved. They look like a model family—two successful, radiant parents with their exemplary daughter, who is as curious and bright-eyed as she is well-behaved. But Thomas and Melanie’s decision to have a child was fraught with anxiety. Almost two years before Natalie was born, Melanie had been pregnant but had a stillbirth. “I wasn’t sure we should have another child after that,” Thomas says. “It’s really traumatic because you’ve built up a relationship with that child. You feel the baby moving, you’re talking to them—and then something unbearable happens.”

Still, they tried again. But Melanie had protein in her urine, often a marker of toxemia of pregnancy, and both feared a second trauma. Six months into Melanie’s pregnancy, her obstetrician identified potential obstacles and sent them to the Royal Alexandra Hospital, now home of the Lois Hole Hospital for Women, where they had access to 3-D imaging technology. It was a blessing.

“We looked at the screen and saw our daughter’s face; she was moving around, and she had her thumb in her mouth,” Melanie says. “We could even see her hair. For me, as a mother, I felt such a relief that she was OK, that she looked healthy. That had a huge impact on me emotionally and mentally.” And in 2005, Natalie was born.

“We looked at the screen and saw our daughter’s face; she was moving around, and she had her thumb in her mouth. We could even see her hair. For me, as a mother, I felt such a relief that she was OK, that she looked healthy. That had a huge impact on me emotionally and mentally.”

As Natalie grew up, Thomas and Melanie became more and more involved with the Royal Alex. They were donors to the Lois Hole Hospital for Women during its capital phase. They took tours of the hospital, continually impressed by the caliber of the technology and the staff. Melanie joined the board.

Then they met Terry Tobin, senior development officer at the foundation. In 2013, he made a presentation to the hospital’s board about bequests and planned gifts. Shortly after, the Nakatsui family made a monumental commitment. They put the foundation in their will. Tobin is both a consultant and an agent. He provides prospective donors with information or sample wording of how they can include the hospital in their estate plans; he also administers and directs those gifts. But he quickly dispels any notion that he persuades people into gift-giving. “There’s nothing more personal or intimate than how a person decides to allocate the wealth they’ve accumulated throughout their life,” he says. “No one can convince you to make a gift in your estate—it always comes from the donors’ hearts and minds.”

"No one can convince you to make a gift in your estate - it always comes from the donor's hearts and minds."

A gift in a will can be customized. Sometimes donors are specific in where they’d like their money to go, while others are content to give to whatever the hospital needs. They can request that their name be public or private. Sometimes Tobin is surprised to find that people who have donated small amounts throughout their life leave to the hospital a considerable bequest. And sometimes, someone leaving a bequest will also end up getting more involved in the hospital during their lifetime. The choice is up to the donor, whose wishes are paramount.

With Tobin’s guidance, the Nakatsui family earmarked $50,000, an amount they’ll add to over time, in their will for the Royal Alexandra Hospital Foundation, to go toward whatever needs funding at the time. Tobin cautions donors about getting too specific with choosing a specific program or area—some areas are well funded, while others need more attention. Some programs may change in years to come. “Terry made it very easy for us,” Melanie says. “He explained to us in a very understandable way, and we decided from there.”

Tobin underscores the importance of telling the donors’ stories. “Gifts from strangers are beautiful, but we’d like to know from whom we get our gifts so we can tell their stories,” he says. “If someone prefers to remain anonymous, we can tell their story in a way that protects their identity, but we like to share stories. There’s usually a connection between what the donors think is important and what the foundation does.”

Malcolm Burrows agrees with Tobin. As head of philanthropic advisory services at Scotiabank’s Private Client Group, he is happy to discuss the logistics of planned giving and talks about the importance of consulting an expert. And of course he speaks enthusiastically about the benefits of leaving part of your estate to charity, and how people can gift a charity and eliminate tax on those funds. But he, too, circles back to the importance of storytelling.

“One of the great mistakes in the area of planned giving is that we focus too much on the mechanics and not enough on why people want to give back. It’s not so much a question of ‘Will I do it if I find the right way to do it? Will I do it if I save enough taxes?’” Burrows says. “Planned gifts are driven by life experiences— putting it in that context is the first thing to grapple with.”

It’s no surprise then, that another motivating factor behind the bequest of the Nakatsuis was reading the story of Kazimierz (Kasey) Kozak, who left a gift to the Royal Alexandra Hospital Foundation to honour his late wife.

Not only do the Nakatsuis have their own incredible story to tell—they were inspired by someone else’s story. And as Natalie Nakatsui reads her science fiction novels, it’s clear that the power of telling these stories will carry on.

For further information about the needs of the Hospital, and the bequests and planned giving program (including sample wording for making a gift in your will), please contact Morrel Wax at (780) 918-8417 or [email protected].