Retired farmer Charles Park reflects on the stent surgery he had at the CK Hui Centre nearly three years ago, and the perspective he’s gained as time has passed. 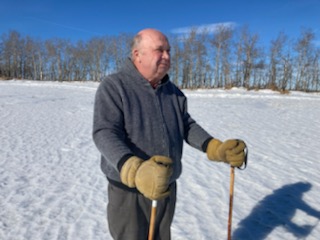 Nearly three years ago, retired farmer (and active dog breeder) Charles Park found himself in the CK Hui Heart Centre having two cardiac stents inserted. The stents likely saved his life, and meant he did not need to have to go the other route—open heart surgery.

Since then, he’s had time to settle into a routine, get back to the things he enjoys, and reflect on his experience.

Overall, he has ‘been good ever since.’

“I take my medication that I’m supposed to, and exercise, and am truly grateful,” he said. “I appreciate that I’m still alive, and in reasonably good health.”

He also added that he has not noticed any side effects from his medications.

While the aqua fitness classes he was previously taking were unfortunately cancelled due to COVID, Charles has found other ways to keep moving and stay fit. He’s been walking almost every day, aiming for 10,000 daily steps and keeping Sunday as his day of rest. He found a nice pair of used skis and spent much of the snowy winter and spring months doing some cross-country skiing. Living a few miles outside of Ponoka, there is plenty of good country for Charles to traverse and explore.

And when he’s got downtime, he has no problem spending it with his beloved five-year-old golden retriever, Bella, visiting with family, or watching shows.

“I’ve probably watched everything there is to watch, at this point,” he joked. He enjoys historical documentaries and “shows that make you think,” covering topics like the Viking expeditions, deep sea exploration, the construction of Egypt’s pyramids, and more.

There is also a new bright spot in his life—Charles has found a new lady friend, someone who ‘makes his life much better for all sorts of reasons,’ such as companionship, friendship, talking, skiing, everything.

Charles sadly lost his wife several years ago, and as he said, “Everybody who gets to be our age is hoping for lasting long-term relationships, to find that companionship after most have lost a spouse.”

“It just makes life worth living to have that special person in your life,” he noted. “I’m very happy.”

He’s also had time to think back on his symptoms and surgery, and discuss with others who had similar experiences.

“I only needed one MRI but I’ve heard of people needing multiple,” he said, still marveling at how effectively the MRI techs can investigate one’s arteries and find blockages. He also remains impressed with how surprisingly quick and straightforward his stent surgery was (about 45 minutes, in and out!).

On a pre-COVID trip, Charles had the good fortune to spend some time at a resort, where he got to talking about heart health with several other travelers, all chatting, swapping stories and showing off their scars.

After some discussion, they connected the dots that they’d all experienced sweating episodes leading up to their respective cardiac events.

Charles estimates he was having sweating episodes for the six months leading up to his emergency visit. While it’s unclear if it was related to an earlier polyp surgery he required, the others confirmed similar symptoms before needing a stent or suffering a heart attack.

One person mentioned they’d often go through two sets of clothing a day due to the sweating episodes.

It seems they’d uncovered an awareness issue around these ‘hot flashes’—and other symptoms—that none of them realized were markers of future heart issues.

For Charles’ cardiac event, he recalls that, “The pain was in my right arm, but everybody says it’s your left arm. So I didn’t think it was a heart issue, thought it was a pulled muscle or something. I just knew I wasn’t feeling right.”

It’s led Charles to a few realizations over the years.

One is that we’re lucky to be in a country where we have access to the kind of care that we do, with the healthcare system that we have.

“If people realized how expensive this kind of surgery can be elsewhere,” he said, “they’d be a lot more thankful that they don’t have to pay for that kind of thing.”

In Charles’ experience traveling, he’s been to countries where people make a concerted effort to self-diagnose as a way to try save themselves crucial time and money on medical bills. He’s met groups of people who gather in coffee shops to confer about all their various symptoms, treatments, and experiences—and those of their family members—so they can be as informed as possible before paying for a visit to the doctor.

And on a related note, he also advises that we need to be responsible for our own health, as best we can.

“COVID has brought to the forefront that the government can’t necessarily do everything for us,” he said. “We have been so blessed in this country and so well loved that you really need to think about sharing your wealth, your disposable income, and whatever lessons you’ve received or earned through your life that are far more than you expected.”

“Make donations to the medical system, for the good of everyone,” he encouraged. Why?

“Because every one of us is going to end up in the medical system at some point. It’s just a question of what service you’re going to need in that short period of time that will make the difference between living and dying. So think seriously about making a donation.”

Charles mentioned he may not have been of that opinion when he was young and healthy, but it’s something many people will discover as they grow older. “People get sick at all ages, I learned that later. If you make above-average wealth, think about donating! Tax deductible!”

We’re so happy to hear Charles is doing so well, and thank him for sharing his story and perspective—and giving us all a few more things to think about!

For the good of everyone...

PLEASE CONSIDER A DONATION TO THE CK HUI HEART CENTRE