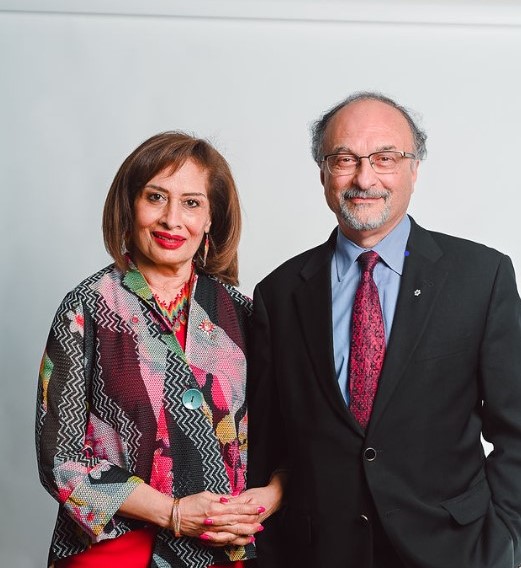 Their Honours were welcomed as the hospital’s newest Patrons in recognition of their transformational contributions, acts of service, and leadership in supporting the Royal Alexandra Hospital.

The naming and celebration of a Patron is a rare and special act. The Royal Alexandra Hospital Foundation had not named a Patron for almost 10 years.

In the history of the Royal Alexandra Hospital Foundation, only three individuals have been named Patron. Long-time donors William K. and Mary Jo Robbins, residents of Houston, Texas, were named Patrons in 2007 for their transformational philanthropy which led to the creation of new scholarships, endowed funds, and the Robbins Pavilion—home to the Lois Hole Hospital for Women and the CK Hui Heart Centre.

Philanthropist, former board member and former board chair, Dale Sheard was named Patron in 2014, for her leadership in bringing the province’s only dedicated women’s hospital—Lois Hole Hospital for Women—to life.

Through her philanthropy, Sheard also created the Cavarzan Chair in Mature Women’s Health Research, a long-term research endeavour that raises awareness of the health concerns of maturing women while also seeking to identify and close gaps in the care they experience.

Now, Her Honour Salma Lakhani and His Honour Dr. Zaheer Lakhani have joined this esteemed company of individuals as a result of the couple’s legacy and service to the Royal Alexandra Hospital, the hospital foundation, and the wider community the hospital serves.

Among a long list of accomplishments and accolades, Dr. Zaheer Lakhani holds the title of the longest-serving board member in the history of the Foundation. He will officially leave the board when he retires in 2022, having served as director, vice-chair, chair, and past chair. Dr. Lakhani is an acting physician and educator, serving as Clinical Professor with the Department of Medicine at the University of Alberta and practicing at the Royal Alexandra Hospital in Edmonton and the Sturgeon Community Hospital in St. Albert.

Lieutenant Governor Lakhani has received a plethora of recognition for her services to the community and civil society, notably her commitment to the values of pluralism and inclusion and championing those who face barriers in life. Of many, she has led community campaigns supporting women’s health, including the Lois Hole Hospital for Women, and supported services that further the lives of immigrant women and their families. As Lieutenant Governor of the Province of Alberta, Salma Lakhani shares an important history with the namesake of the women’s hospital, the late Hon. Lois Hole, 15th Lieutenant Governor of the Province of Alberta. As Vice-Regal, she represents Canada’s head of state in Alberta, Queen Elizabeth II.

The Patrons were named upon recommendation by the serving CEO, senior leadership, and board members. Sharlene Rutherford, President and CEO of the Royal Alexandra Hospital Foundation, shared her perspective on their elevation.

“This is a proud moment for all of us because we have long considered Salma and Zaheer to be part of the Royal Alexandra family,” says Sharlene Rutherford, President and CEO of the Royal Alexandra Hospital Foundation. “They represent the ideals that our hospital and its medical centres of excellence strive for each day: to deliver state-of-the-art, compassionate, equitable, healthcare to all patients from all walks of life and leaving no one behind.”

George Coon, Chair of the Royal Alexandra Hospital Foundation Board of Directors, says the many achievements of Salma and Zaheer as individuals and as a couple are quite extraordinary.

“It is rare for a husband and wife to be bestowed with as many honours as they have—but then again, Salma and Zaheer are unique individuals with a compelling history and a remarkable life of service,” says Coon.

About the Royal Alexandra Hospital Foundation