Stories of HopeWomen’s Health Takes Flight Thanks to Elevate Aviation

Beyond the difference that Elevate Aviation is making for women in the aviation and aerospace industries, they are now making a difference in the healthcare for women across northern Alberta through their support of the Royal Alexandra Hospital Foundation 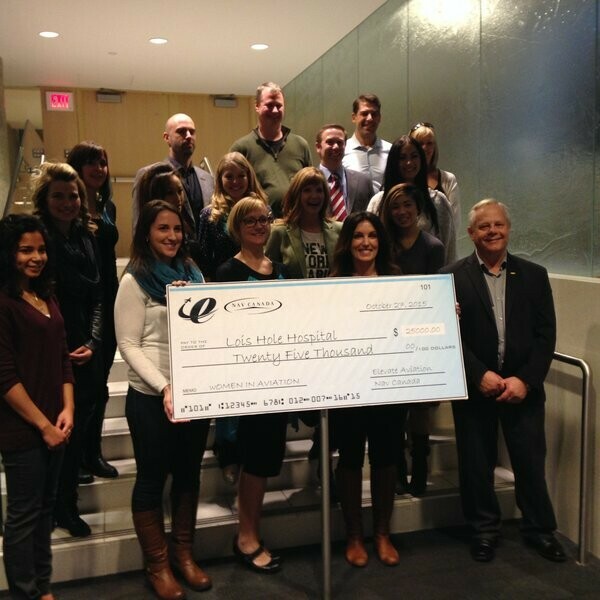 In a sector dominated by men, Kendra has, for the past 16 years at the Edmonton Area Control Center, established herself as a leader among her peers and a role model to other women. Kendra often mused about the continued lack of female presence in the aviation sector in general and, over time, decided to do something about it.

Stemming from her passion for philanthropy and her desire to help women become strong, independent, and economically self-sustaining Elevate Aviation was born. Kendra’s mission in Elevate Aviation is gender balance in the aerospace and aviation industries.

“My hope is to amplify the voices of those women who are already in this field, use gender responsive advertising to attract additional women to aviation, and provide a platform for women to thrive and succeed.” says Kincade. “I hope that by showing what a terrific career aviation really is, we can encourage more women to enter this male dominated industry, break down barriers and change the statistics.”

As an extension to the organization’s philanthropic mission Elevate’s third annual Women in Aviation calendar launch party was the perfect opportunity for the Elevate team to support another important cause in Alberta, the Lois Hole Hospital for Women. Elevate’s support of the hospital was further extended by matching contributions from Nav Canada.

Nav Canada is Canada’s Air Navigation Service Provider and an organization that defines itself through the enthusiasm and compassion it brings to the communities it serves. For this reason Nav Canada supports and matches the efforts of its employees who donate time, money and energy back to their communities. Since Elevate’s charity of choice is the Lois Hole Hospital for Women, Nav Canada readily agreed to provide its support to Alberta’s only dedicated women’s hospital.

The Women in Aviation calendar is an annual project taken on by the Elevate team. What began as a light-hearted and fun project that shines light on the incredible women of the Canadian Aerospace and Aviation industries has turned into a major fundraiser benefiting women across Alberta, Western Canada, and the Northern Territories.

The third annual launch party in support of the Lois Hole Hospital for Women was a smashing success and featured a fashion show, silent auction,  caricature artist, incredible food, music, dancing and much more! A local artist whose work was created in front of guests and then auctioned later that evening was a focal point for many attendees. And as an added bonus for guests, a draw was made for a flight for two from WestJet!

An ultrasound examination performed by the patient's attending physician at the bedside using the mobile ultrasound unit serves to enhance the assessment of the baby. The technology is considered hugely valuable to the hospital as it provides care to patients who are considered high-risk due to the health challenges of the mother, the baby, or both.

“It is important to have well-functioning portable units in the Labour and Delivery suite for assessment of baby’s position, viability of natural delivery, placental position, and assessment of well-being in addition to critical management of twin and triplet deliveries.”

A mobile ultrasound unit also assists in the detection of potential heart-related issues in babies, and builds upon the care and treatment provided by the hospital’s team of cardiologists at the CK Hui Heart Centre, through the Maternal Heart Health program.

The addition of the portable ultrasound units for Labour and Delivery have enhanced the ability of the hospital’s team of Maternal-Fetal Medicine doctors to monitor deliveries and decide quickly upon appropriate treatments and courses of action – resulting in improved outcomes for moms and babies at the Lois Hole Hospital for Women.

It is through purchases like the one supported by Elevate and Nav Canada that great hospitals are built. The appreciation from the Royal Alexandra Hospital Foundation and the staff and patients of the Lois Hole Hospital for Women extends far beyond our evening of gratitude and thanks.