Thanks to the advocacy of a team of ophthalmologists, neurologists and emergency medical professionals, the Royal Alexandra Hospital Foundation provided funds to install a Fundus camera for the ER department to help better detect ocular strokes. 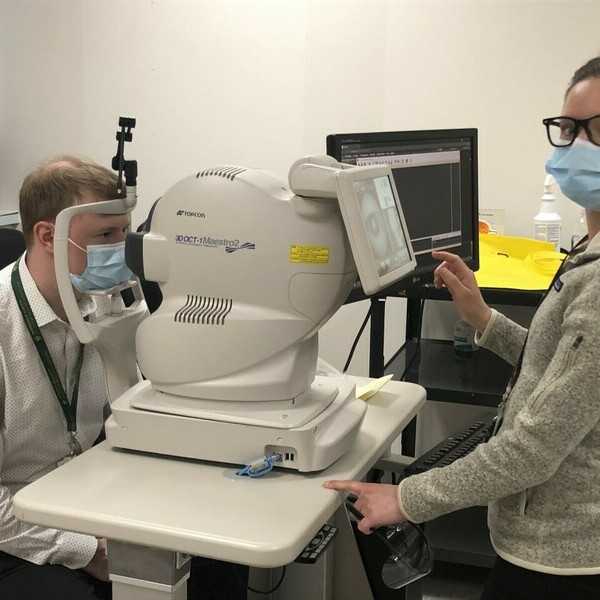 The window of opportunity to permanently reverse an ocular stroke is only about 4.5 hours.

Characterized by the sudden onset of one’s vision going completely black in one eye, an ocular stroke is a serious medical condition often leading to permanent vision loss in the affected eye. Patients who suffer from ocular stroke are often unaware of other serious medical conditions which need urgent treatment, are at a higher risk of brain stroke. As an ocular stroke affects vision without other symptoms or painless, many who experience one often do not visit the emergency room, opting to see a family doctor or optometrist and miss the crucial time frame in which clot-dissolving treatment can be provided in an attempt save their vision. Once this window has elapsed, patients often receive the news that their loss of sight is irreversible.

Thanks to the advocacy of an interdisciplinary team of ophthalmologists, neurologists and emergency medical professionals, the Royal Alexandra Hospital Foundation provided funds to install a fundus camera for the ER department to detect ocular strokes early. A fundus camera is a specialized camera designed to photograph the retina which is the eye's interior surface, acting like the film of the camera. The fundus camera is also equipped with OCT (Optical Coherence Tomography) technology to image the microscopic layers of the retina and detect the earliest changes when the blood supply to the retina is lost.

As vision loss may have many causes, this user-friendly camera helps ER physicians and ophthalmologist determine whether an ocular stroke has occurred swiftly and accurately. As an added bonus, the fundus camera can also be used to diagnose a variety of other serious eye related health issues such as a detached retina, diabetic retinopathy, pressure on the optic nerve, and cancers of the eye thanks to the camera’s advanced imaging system.

Spearheaded by Dr. Imran Jivraj and two ophthalmology residents, Drs. Matt Benson and Meghan Smith, the team created a pathway to treat ocular stroke in the emergency room to catch ocular strokes in patients sooner, avoiding vision loss as much as possible.

“It’s devastating to see people come in with vision loss with little we can do about it if they’ve missed the window of opportunity for treatment. With this new pathway, patients presenting symptoms of an ocular stroke will have the eye evaluated right away by ER doctors, ophthalmologists and neurologists on-call who can work together to decide the best course of treatment to help save a patient’s vision.” - Dr. Jivraj

There has already been interest and excitement about the fundus camera and this new ER pathway program in other medical sites across Alberta, including a hospital in Calgary that wishes to adopt the same pathway program for their ER.

“I believe this will be a new standard of care for treating ocular stroke. Our goal is to have a fundus camera at every emergency site in Alberta and expand the Eye Stroke pathway.”

“There are so many people to thank for making this pathway program a reality," notes Dr. Jivraj. "Particularly Meghan Smith and Matt Benson, the two stellar residents who have worked tirelessly to move this program forward, as well as our emergency medicine and stroke neurology colleagues at the Royal Alexandra Hospital.”

Dr. Jivraj also has some words of thanks for the Royal Alexandra Hospital Foundation: “This project could so easily have lost momentum without funding. Ultimately getting funding for a project like this breathes life into a program that will help diagnose eye problems early and at a treatable stage before vision loss becomes irreversible. We are so grateful for the Royal Alex Foundation.”

The fundus camera is due for installation in the Royal Alex emergency department this year, making it Canada’s second ER department to have this type of emergency ophthalmic imaging system. This new ER pathway is the first of its kind in Canada.