Stories of HopeShining a Light Onto the Darkness

Past board member, Kari Ericksen, continues to make an impact at the Royal Alexandra Hospital and the Lois Hole Hospital for Women with her advocacy for women's mental health. 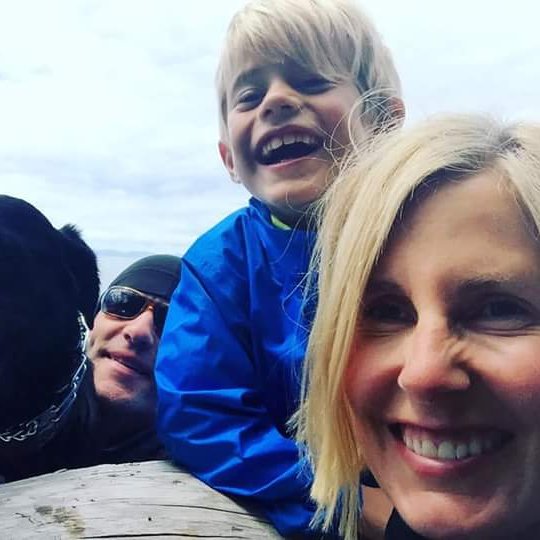 In the fall of 1999, Kari Ericksen was 23 weeks pregnant with twins. A typical and healthy pregnancy up until that point Kari could have never expected what she was about to go through.

After feeling a repeated tightening in her belly Kari was checked in to a local hospital’s labour and delivery floor; she was in pre-term labour. Shortly after check-in she was whisked by ambulance to the Royal Alexandra Hospital, the hospital that would provide her babies their best shot at survival if they were to arrive early.

The same could not be said for Kari.

As Kari went through what was necessary to keep the twins in utero she remembers vividly being scared and alone.

“I remember asking the nurse to turn off the volume on the monitor so I didn't have to listen to my babies heart beats,” shares Kari. “I didn't want to hear them, to know they were alive, to love them. I was absolutely terrified and no one was asking if I was mentally ok.”

The panic attacks started shortly after she was admitted to the hospital in pre-term labour. The attacks were daily, and they were completely debilitating.  After the panic attacks started Kari was never the same.
Along with the panic attacks came anger. Questions swirled through her mind. What had she done to deserve this? Why was her own body letting her down like this?  Shame and self-loathing followed quickly behind.  How could she possibly be a good mother if she couldn't even keep the babies alive before they were born?

As a result of all of her mental struggles Kari twas prescribed anti-depressant medications.  While the medication calmed her mind it exacerbated her shame.  She felt like a weak and pathetic excuse for a mother. After the twins arrived safely Kari’s mental state did improve but the mental wounds were far too deep to have closed completely.

A few years later Kari became pregnant for a second time and she was certain this time would be different because it was just one baby, not two.  Just one.

This time the contractions started at 16 weeks, and with the contractions came the panic attacks.  This time Kari knew better and asked for help, and thanks to the incredible care Kari’s doctors were able to provide she was able to manage her mental well-being.

Kari was thankfully able to carry her third son to a healthy term of 37 weeks.

Kari and her husband had always wanted a large family. Not too long after her third son was born conversations began about trying again. And though Kari and her husband desperately wanted more children Kari knew she couldn't face the panic attacks again.

“I feel guilty and ashamed for not being stronger, mentally tougher,” says Kari.  “I know I need to get past this and forgive myself but so far I have not been able to, not completely anyway.”

Kari’s experience taught her compassion and understanding for those suffering from mental illness.  Kari has a personal appreciation for what that feels like to be under mental duress and to feel completely out of control.

The experiences Kari had have led her to advocate for women who are going through similar experiences and let them know that they are not alone. During the time that Kari served on the Royal Alexandra Hospital Foundation she never faded in her commitment to raising awareness for the cause of reproductive mental health, and now that commitment has led to Kari’s participation on the Advisory Committee for The Lois Hole Hospital for Women Chair in Perinatal Mental Health.

“Kari is the reason our foundation was eager to pursue the opportunity to fund reproductive mental health research and care at the Lois Hole Hospital for Women,” said Sharlene Rutherford, Vice President and COO of the Royal Alexandra Hospital Foundation. “Kari inspired our foundation and our board of directors to recognize a need that is so often overlooked: women’s mental health, and for that we are forever grateful.”

As the chosen foundation representative on the advisory committee Kari will continue her work toward ensuring mental health for women is being made a priority. The committee will provide guidance to ensure the research being conducted is affecting real change for women across the province of Alberta and beyond.

Our sincere thanks to Kari for shining a light where if ignored there can be so much darkness. It is because of you Kari that women and their families will see brighter days.