Stories With HeartSaving lives inside and out of work 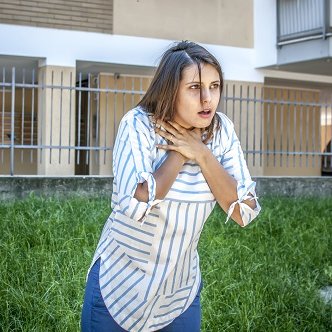 Co-workers from the Royal Alexandra Hospital’s CK Hui Heart Centre Samantha, Himani, Ashley, Linda, Lynette and Nicole are a close knit team both inside and out of work. In late November the team went out for dinner to celebrate Lynette’s mother’s life after her recent passing. The group had already finished their meal when the outing took a sharp, dramatic turn when they heard a loud troubling sound.

Linda turned around to find that the woman at the table behind her was standing up in the classic choking stance, with her arms crossed and hands around throat. Lynette immediately called out “she’s choking” and Linda sprung into action and standing directly behind the woman in distress and began performing the Heimlich maneuver. It was only after a two repetitions that a large piece of steak flew out of the women onto the table in front of her. The woman, an orthopedic surgeon herself, was so grateful and appreciative she insisted on paying for the team’s entire meal.

“I’ve been a cardiologist nurse for such a long time and having worked in acute ill settings these are the types of situations we train for, it just made sense for me to start doing the Heimlich maneuver,” shared Linda. “I’m just glad I was there at the right time and place and that it had a positive outcome.”

Thankfully situations like these are few and far between. On behalf of the Royal Alexandra Hospital Foundation we thank you, Linda Kvill, for your outstanding work. You make a meaningful difference each day at our hospital, and now the meaningful difference you made for the woman you saved will be something she and her family are forever grateful for as well.