When we say community support builds great hospitals―we’re most often referring to the advancements in care as a result of philanthropy in our community. Now, donations of a different kind are coming to the Lois Hole Hospital for Women... 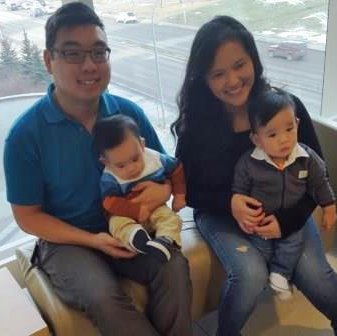 The NorthernStar Milk Bank recently opened its doors―freezer doors that is―at the Lois Hole Hospital for Women. This breastmilk donation site, the second by NorthernStar to open in our city, meets an important need for many fragile infants not only in Edmonton, but across the country.

When the Lois Hole Hospital for Women milk bank location was honoured with a grand opening celebration, two former patients were among the VIP guests: twin boys Christopher and William Hsu-Hung, along with their parents MJ and Stanley.

When Christopher and William were born six weeks early their mother MJ was unable to initially produce enough milk for them. Both parents were relieved and grateful to have access to donated milk for their premature sons during a vulnerable time.

“I felt so helpless,” mother MJ shared. “I just wanted to be able to give them what they needed and I couldn’t. I was so grateful for the donor milk that was available. I knew it would give my boys the best start possible.”

MJ wanted to pay it forward. So when she was finally able to begin breastfeeding her boys, she knew she would become a donor herself, thereby returning this special gift so other infants could benefit.

Claire Blacklock also attended the grand opening, along with her son Charlie, now four months old. Claire was the first milk donor at the Lois Hole Hospital for Women site, upon learning of her son’s diagnosis of a dairy allergy making him unable to benefit from her own breastmilk.

“The thought of all of that precious milk going to waste was more than I could handle,” says Blacklock. “So I looked online for a place I could make a donation and I found NorthernStar.”

The Calgary-based NorthernStar Mothers Milk Bank is the group responsible for accepting, pasteurizing and distributing donated breast milk to fragile infants across Canada. The group now has 11 drop off sites across the Prairie Provinces.. The Royal Alexandra Hospital Foundation was proud to support the initiative by providing donor dollars to purchase the special freezer required to keep the donated milk safe prior to pick-up and transfer by NorthernStar.

“We are thrilled to have the drop site at our hospital and so thankful for the Foundation’s support of the initiative,” says Janie Tyrrell, Executive Director of the Lois Hole Hospital for Women. “I’d like to say a special thank you to the donors who make opportunities like this one available at our hospital.”

The Royal Alexandra Hospital Foundation believes the program highlights the very best in community support ― recognizing those who supported the purchase of the freezer, and those who will continue to fill it with nourishing breast milk for infants in need for years to come.

“This really is another example of how community support builds great hospitals,” says Sharlene Rutherford, Vice President of the Royal Alexandra Hospital Foundation.  “It’s so fulfilling to support a project that is about leadership, collaboration, and innovation and results in immediate benefits for our smallest and sickest patients.”