May 5th is Canada's National Day of Awareness for Missing and Murdered Indigenous Women, Girls and Two-Spirit people (MMIWG2S). 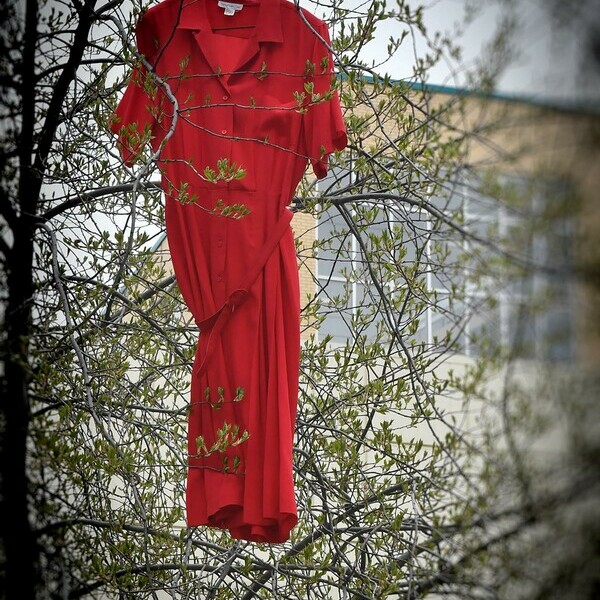 Red Dress Day was started in 2011 by Metis artist Jamie Black, based on her REDress art installation at University of Winnipeg. Since then Red Dress Day has evolved into a grass roots movement day of action and reflection. Across, the nation people hang red dresses in both public and private places in memory of those who are missing to call attention to disproportionate rates of violence against Indigenous people, especially women.

Across the Royal Alexandra Hospital today you’ll likely notice red dresses hanging in several parts of the campus, as well as people wearing red in honour of Red Dress Day.

The empty red dresses are meant to create a visual representation of the missing people who should be wearing them, and recognize the pain and loss of families, victims and survivors. The colour red was chosen because it represents the lifeblood and connection between all people, and carries significance for many Indigenous cultures. According to lore, red is the only colour spirits can see. The red dresses aid in calling the spirits of missing and murdered women and girls back to their loved ones.

Today, site leadership and staff at the Royal Alex honour and remember those who are no longer with us, and draw attention to the legacies of residential schools and the socio-economic conditions like poverty, sexism, racism, and discrimination that often fall the hardest on women and gender diverse people.

You can mark the day by wearing red and posting it to social media, and use hashtags such as #MMIWG, #MMIWG2S, #RedDressDay, #WhyWeWearRed, and #NoMoreStolenSisters.