It’s been a decade since Nichols stepped away as part owner of the Edmonton Oilers. He might be the man who saved hockey in Edmonton, but he’s also the man who helped donors build the Eye Institute of Alberta. 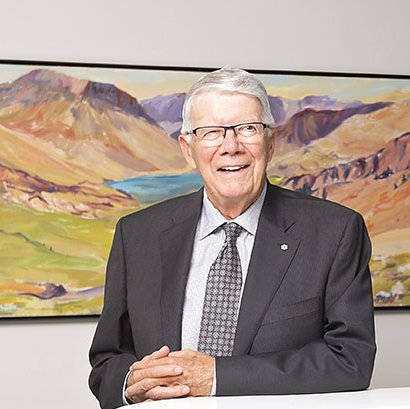 People call Cal Nichols “the man who saved hockey in Edmonton.” Nichols was at the helm of a ticket drive in 1996 that helped prevent the sale of the team. A fundraising effort to purchase the team the following year saw Nichols, as chairman of the group behind the successful bid, to become part owner. Edmonton’s hockey future looked bright.

When Nichols set off for California in 2007 for an NHL governor’s meeting with his wife Edna he never imagined that, in the course of his travels, his world would begin to darken.

While he was in California, Nichols noticed a change to his vision. He had recently turned 65 and assumed that his decreased vision was a natural part of aging. But the “shady spots” he was starting to experience were hampering his ability to focus.

A hotel concierge recommended a local optometrist, who said cataracts were the problem. He recommended Nichols consult an ophthalmologist upon his return home. In Edmonton, Dr. Stanley Chan at the Royal Alexandra Hospital confirmed the cataracts but, to Nichol’s surprise, there was more to the story.

Cataracts was the least of his problems. He had a detached and torn retina—and Fuchs Corneal Dystrophy, a genetic disease that affects only one per cent of the population.

He was losing his vision, and fast.

It was a mere three hours after the diagnosis that Nichols was prepared for surgery at the Royal Alexandra Hospital.

The speed at which everyone in the department connected made an impact on him.

“I was so impressed with the collaboration of the doctors and the exceptional quality of care,” Nichols says. “The staff are very passionate about the care they provide and you can see it in everything they do.”

Several years later Nichols was approached by the Royal Alexandra Hospital Foundation to take a leading role in a $4 million fundraising campaign. The campaign’s three-pronged approach was to raise $2.3 million to improve the patient experience, $1 million to support further investment in the Ophthalmic Surgical Skills Centre and $500,000 dedicated to eye health research.

“It was a no-brainer for me,” recalls Nichols. “This was the centre that saved not only my eyesight but that of my wife Edna who was also affected by cataracts. I was honoured.”

The renaming of the Regional Eye Centre to the Eye Institute of Alberta was the first big change for the centre. Nichols made the announcement himself in 2015. He set the tone for the campaign and secured the institute's place as northern Alberta’s home for eye health excellence.

Now, four years later, the fundraising campaign and renovations to the space (see sidebar) have been completed. “Donors have provided an improved experience for patients at the Eye Institute of Alberta,” Nichols says. “Donor support will stretch far into the future through funding for advancements in eye health research and a state-of-the-art training centre that will attract the best trainees to the Eye Institute for generations to come.”

It’s been a decade now since Nichols stepped away as part owner of the Edmonton Oilers. He might well be the man who saved hockey, but he’s also the man who helped donors build the Eye Institute of Alberta.

LOOK INSIDE THE EYE INSTITUTE OF ALBERTA

Thanks to donors, eye care in Alberta has never been better. Improvements to the patient experience are clear before you enter the Eye Institute of Alberta. Here are some of our changes: