Our Hospital, Our StoriesPeer Support Worker Has Walked a Mile in His Clients’ Shoes

When Rob Gurney meets patients at the Royal Alexandra Hospital who are lonely, living on the streets, addicted, and have nowhere else to turn, he is in a unique position to help. 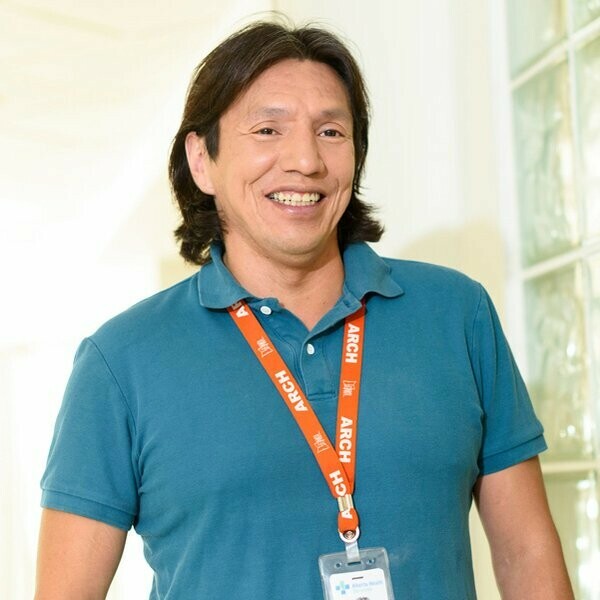 Ten years ago, that situation was Rob’s reality.

“I moved to Edmonton when I was 17, and I got into the dance club and bar scene,” says Rob. “At that age, it was: wow! Lights! Dancing! Alcohol! People having fun! I found a group of people to hang out with and had lots of good times. But at the same time, I was experiencing depression, and my addiction to alcohol started feeding that depression.”

“Addicts get into that lifestyle because they need an escape from a painful reality. I became suicidal and tried a couple of suicide attempts. By the time I was in my twenties, I was homeless and started injecting drugs. I lived on the streets of Edmonton for about 10 years, having no contact with my family.”

Rob was born in Prince Albert, Saskatchewan and grew up on the Montreal Lake Cree Nation. Neglected and mistreated, he was in and out of the hospital 12 times before the age of four due to malnutrition. He ran away from home but didn’t get very far. Picked up by a neighbour, Rob was brought back to his kukom’s (Grandmother's) house. When he arrived, young Rob found her drunk and passed out. There wasn’t going to be a life for him on the reserve.

Rob was taken into a foster home soon after and adopted by a Caucasian family at the age of five. While his new home life wasn’t perfect, it was a stable and gave him the opportunity to be reunited with four of his biological brothers and sisters. He was able to attend school, worked a paper route, and grew into adolescence.

Once he was living in Edmonton, Rob’s hazardous lifestyle continued for many years.

“My last stint of drinking really scared me."

Once he was living in Edmonton, Rob’s hazardous lifestyle continued for many years. Alcohol and tobacco were constants in his life, along with marijuana, cocaine injection, and crack cocaine. He couldn’t go for more than three or four days without giving into his addictions.

And then, one day three and a half years ago, Rob decided that he had to stop.

“My last stint of drinking really scared me,” explains Rob. “I had tried treatment four times, but finally found a counsellor and a program that worked for me. Later, I went through a three week day program with Alberta Health Services and then a six week Aboriginal residential treatment center, the Sunrise Native Addictions Services Society in Calgary. There is a lot of common ground with addiction, but what works for one person won’t necessarily work for everyone.”

Clean and sober for almost four years now, Rob continues to stay free of his addictions and gets help from Alcoholics Anonymous, a sponsor, an addiction counsellor, and supportive family and friends. Prayer, leading a healthy lifestyle and inspirational readings also keep him centered. However, what mostly keeps him clean is what he describes as a huge desire to simply not be self-destructive anymore.

Rob was recruited by the Addiction Recovery and Community Health (ARCH) team at the Royal Alex through a referral by a community drop in centre he used to frequent when living and working on the street.  They saw his recovery and brought the job posting to Rob’s attention.  “As I read the posting, it spoke to me as a calling,” says Rob thoughtfully. “It was though it was specifically posted for me.”

Rob has a carefully rehearsed speech that he greets his clients with:

“I’m not a nurse or a doctor. I didn’t go to medical school. I’m not an addictions counsellor – but we have counsellors who can help you out. I’m not a social worker – we also have social workers who are ready to assist you. But I have some of the same life experiences as you. I was addicted to alcohol and cigarettes for 25 years. For five years I injected cocaine and also smoked crack. So those are the experiences I’ve had. I just want to sit and have a relaxed conversation with you. Let’s see where you’re at and how you’re doing in life.”

Rob’s gentle and honest words tend to open up a lot of doors with his clients. Knowing that they are speaking with someone who has literally walked a mile in their shoes and had the same experiences with addiction and life on the streets usually breaks the ice very quickly.

“I’ve been treated for overdosing on alcohol at the Royal Alex before. At that time, you were given some antibiotics and some Vitamin B and then sent on your way. There was no consultation, no long conversation, nothing like what we have now. I’ve spoken with more than one patient who has asked ‘where were you five years ago?’”

“Rob has been such a fantastic addition to our team. His one-on-one approach with patients leads to them really engaging in treatment and exploring some longer-term options that will really help.”

“Rob has been such a fantastic addition to our team,” says Dr. Dong. “He has this incredible ability to connect with people in a very different way compared to how I can as a clinician. His one-on-one approach with patients leads to them really engaging in treatment and exploring some longer-term options that will really help.”

Rob says that he sees a lot of remorse and contemplation with his clients. They know they’ve gone down what can be a lonely and traumatic path in life but lack the guidance and help to find a new and better path. When Rob shares his own recovery, it gives them hope to find their own success.

“I tell people that I still have some of the same problems that they do. But now, I have a lot more solutions than problems. Alcohol and drugs used to be my only solutions, but now in recovery I have much better solutions.”

Thanks to the forward thinking behind the Inner City Health and Wellness Program, some of Edmonton's most vulnerable patients are getting the assistance they need at the Addiction Recovery and Community Health Clinic (ARCH) at the Royal Alexandra Hospital.

You too can help support the life-changing work of the ARCH Clinic.