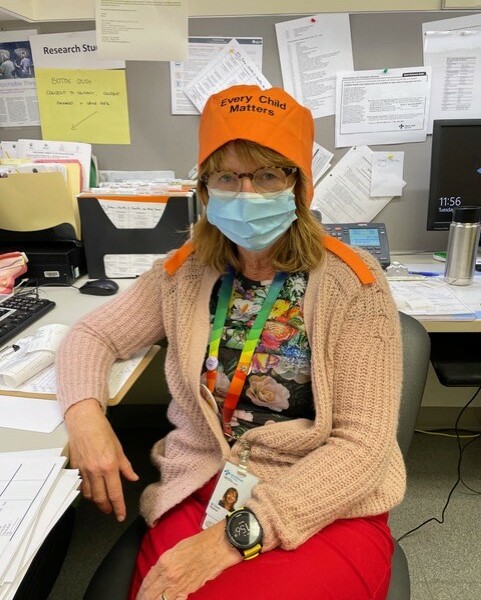 Today, March 31st, is International Transgender Day of Visibility (TDoV), an annual day dedicated to recognizing and celebrating the resilience and accomplishments of transgender communities around the world.

In honour of this day, we would like to highlight the accomplishments of one such community, housed here within the Urogynecology Clinic of the Lois Hole Hospital for Women.

The fact is, access to gender-affirming surgery is limited in Canada, with most patients having to travel to Montreal for surgical expertise.

One of the largest issues is the inconsistency of care before, during, and after a gender-affirming or gender-reaffirming surgery. The majority of patients must fly to Montreal to receive the surgery (often by themselves), spend two or three days in the hospital (often by themselves, and then fly home (again, often by themselves) for proper recovery. And, a high percentage of people undergoing what’s commonly known as “bottom surgery” encounter post-operation complications.

The difficulties of inconsistent care include the progression of complications (such as a mild infection into a potentially life-threatening one), the loss of structure (such as the loss of a neovagina due to dilation difficulties) and emotional distress, which can lead to self-harm,” described Dr. Flood.

“There can also be delayed care due to physicians lacking the knowledge of knowing where to seek help.”

While more centres are beginning to provide gender-affirming surgical care—such as Vancouver and Toronto—there remain many logistical challenges and many regions in Canada that are unfortunately underserviced.

For example, patients from Alberta can receive funding coverage (following a lengthy approval process) to travel to Montreal for the surgery, and to stay in the hospital after the surgery—but what is not covered in Alberta are the costs for social support, like someone traveling with the patient. As a result, many people travel alone to receive major surgery.

Other medical expenses, such as the required dilator kit following a vaginoplasty and other supplies necessary for care, are often not covered. And the surgeries being done in Vancouver and Toronto are currently only available to in-province patients.

But care being provided at the Lois Hole may have a solution to help expand care.

In 2018, Dr. Cathy Flood took a major step forward in providing more consistent perioperative care here in Alberta. She began seeing patients at the at the Lois Hole Hospital for Women on the Royal Alex’s campus.

“Most patients follow up with their surgeons, however that is not possible in this case, as the surgery however is done thousands of kilometres away,” said Dr. Flood. “So we decided to offer a place where patients could receive regular post-operative care, in order to treat any complications early and provide a ‘safety net’ from a surgical standpoint.”

The care being provided offers a unique environment for patients to have continuity of care perioperatively, and develop a reliable relationship with an experienced provider. Care is being provided for transwomen and transmen who are planning to undergo, or have undergone, gender-affirming surgery, and helps bridge the apparent gap between surgical care providers.

BUILDING A BLUEPRINT FOR CARE ACROSS CANADA

Lucas Vasas is a third-year resident in the Obstetrics and Gynecology program at the University of Alberta. About a year ago, Lucas received a WCHRI-OBGYN Residents/Fellows Research Award, supported by the Alberta Women’s Health Foundation (AWHF).

Under Dr. Flood’s leadership as preceptor, this AWHF-supported project will focus on the specific features, protocols, and organization of this care, and also perform a retrospective review of patients and patient outcomes to describe post-operative complications of gender-affirming surgery.

“Our goal is to provide a framework for future care for patients who are receiving the surgery elsewhere then returning home,” he said.

In other words, the plan is to create a blueprint for others to replicate and provide info about the most common post-op complications, including recommended treatment strategies.

“We want to lead by example, and we think it could be a format that works for other centres, in Saskatchewan, or Manitoba, or the Maritimes, where patients have to travel outside of the province to get this surgery done,” he added.

Part of the queer community himself, Lucas became particularly interested in pursuing a career in healthcare supporting the trans community as early as medical school. A graduate of the University of Manitoba, Lucas described educators there seeking to move trans health away from being considered a ‘specialty’ to instead being something in which all physicians had expertise and knowledge.

And, there’s no reason it shouldn’t be as well-known or well-researched as above.

As Lucas stated, “Prescribing estrogen should be just as common as prescribing birth control.”

Lucas also points to the huge demand for—and appreciation of—this kind of service as another reason for the research project.

“There are lots of patients asking for this type of service. I did an elective at a community health center providing trans health services, and the patients were so thankful that it existed,” he said.

To date, Lucas’ project has reviewed the charts of 138 patients who have received this type of perioperative care over the past two years and is creating a narrative description of the care practices to take forward. In order to better incorporate the patient’s perspective, a patient advocacy committee is already being assembled to read the final manuscript, once ready.

Lucas is also focused on providing improved knowledge and care around dilation concerns after a vaginoplasty, which is the most typical genital-altering surgery, followed by phalloplasty and metoidioplasty.

“They have quite a post-op course, once the new vagina is formed,” Lucas said of vaginoplasty patients. “If they are not consistently dilating [the neovagina], they can begin to lose depth, and risk losing it entirely.”

“For the first month after surgery,” he explained, “it’s important to be dilating four times a day, which can essentially take over one’s life.”

Dilation exercises can commonly take at least thirty minutes each, which does eventually lessen over time, but is obviously not an insignificant investment. Pain can also be a limiting factor for these exercises, so patients can learn how to dilate properly and make dilations more comfortable. Pelvic floor physiotherapist Brooke Hanson has made major progress in this area by developing a specific physiotherapy program to assist with issues related to gender-affirming care.

Lucas is optimistic that this care being provided at the Lois Hole Hospital for Women and his research will provide some much-needed support to the trans community.

The expansion and creation of similar care practices across Alberta and other provinces would allow patients to be treated in a place more familiar to them, and provide a plethora of other much-needed supports and benefits.

Lucas pointed to two main barriers that transgender people often face in seeking perioperative care. One is that they risk being dropped by their family physician for coming out as trans. Another is a gap in experience and understanding.

“Frankly, not every physician that is practicing has this experience. And if a physician is comfortable with a patient being trans, that patient may be that physician’s ONLY trans patient.” Which of course implies some stumbling blocks.

Fortunately, more and more physicians in the area seeking out trans care practices to expand their own knowledge, “going above and beyond in learning more about this area, seeking out more info, and sharing what they plan to do [to continue learning].” From an educational standpoint, all gynecology residents now spend time training in trans care as part of their urogynecology rotation, in the hope that future gynecologists will be more comfortable and capable in offering this care in their future communities.

Dr. Flood and Lucas also kindly shared some perspective around International Transgender Day of Visibility as well as their hopes for the future.

Lucas advises people to be open and supportive of the people in their lives, saying “There are probably people in your life you don’t even know are transgender, but they are. Everyone comes from all different walks of life, so always be kind and respectful.”

“I still see many people who lose their families, friends, jobs, etc when they decide to live their true selves,” Dr. Flood shared. “I think we can be better allies when, whenever we see transphobia, or inaccurate comments about the gender diverse, we speak up.”

Dr. Flood also added two simple recommendations on how to show your support: wear a pronoun pin to establish yourself as an ally, and add your pronouns to your Zoom identity.

Both are thankful for the support they’ve received from the community and organizations like the Women and Children's Health Research Institute (WCHRI) and the AWHF.

“It’s incredibly important to have people willing to support this type of research,” said Lucas “As a resident, we need to seek out grants and funding. WCHRI is one of the places able to do that, which allows me to publish my project and add to that knowledge base and library of research.”

Without WCHRI, “We wouldn’t be able to seek out a statistician, we wouldn't be able to pay the application fees to publish the research when it’s done… This research just wouldn’t be possible.”

Looking ahead, “I hope someday that all people see transwomen as women, and transmen as men, and accept the gender identity that is determined by an individual," said Dr. Flood.

“I appreciate the Lois Hole Urogynecology Clinic for supporting, without hesitation, and in a safe affirmative way, the initiative and sustainability of providing transgender perioperative care as part of the urogynecology program.”

We at the Alberta Women’s Health Foundation and Royal Alexandra Hospital Foundation are extremely proud of, excited by, and thankful for the work being done by Dr. Cathy Flood, Lucas Vasas MD, Dr. May Sanaee, physiotherapist Brook Hanson BSs MScPT, Matthew Mancuso BSc, medical student Alexander Howard, Dr. Momoe Hyakutake along with all the staff in the Urogynecology Clinic, and all those helping to advance health care and knowledge for the transgender community.

Happy International Transgender Day of Visibility! We hope you’ll join us in celebrating.