Stories of HopeImproving Bereavement Program and Policies for Indigenous Women 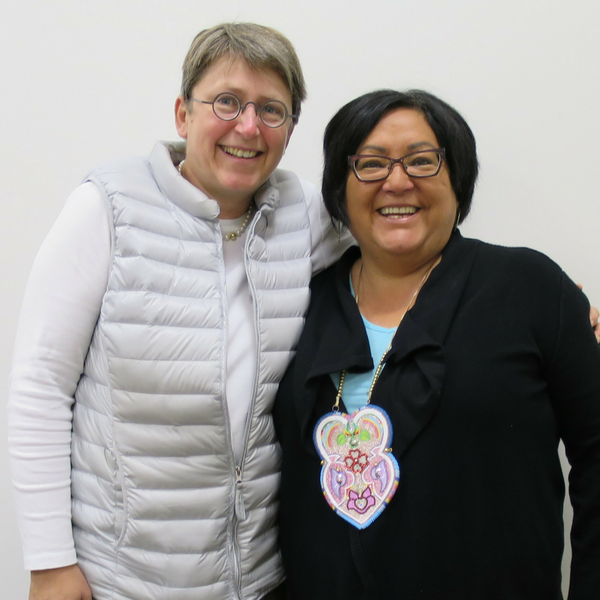 It is estimated that the infant mortality rate for Indigenous women is higher than the national average. Sadly, many Indigenous women don’t feel that their grief has been adequately addressed — leading to potentially harmful effects long-term.

Dr. Caine and her research assistant, Roxanne Tootoosis, sought to address how healthcare practices, bereavement programs and policies can be improved for Indigenous women that have experienced this tragedy. To do this, they decided to speak to the women themselves and hear their stories.

Initially, recruiting participants for the study proved to be a difficult task. Tootoosis finally found interest when taking the study to “ceremony”: activities that connect Indigenous people to the next dimension of life — night lodges, sweat lodges, Sundance lodges, etc. “When we tried to recruit through a Western paradigm, nothing happened, so I took it to ceremony…we had so many [interested participants], we eventually had to say ‘stop!’,” says Tootoosis.

By involving themselves in the ceremonies the team opened the doors for participants to be recruited, and conversations with the women to begin; allowing them to articulate their stories of loss and explain how the “system” can be improved. It humanized the whole process.

“We need to be aware of the diversity within the population,” Dr. Caine added. “Women come from diverse communities and cultural practices during that process.”

The ceremonies opened the doors for participants to be recruited, then Tootoosis initiated conversations with the women; allowing them to articulate their stories of loss and explain how the “system” can be improved. “It just humanized the whole process,” Tootoosis explained. “They were not numbers that went through the system, they are [people] with emotions and feelings that aren’t validated.”

The conversations with Tootoosis helped the women to heal and more fully acknowledge their experience: “One participant wanted to take me to the cemetery because at the time [she lost her baby] she was too distraught — she let the hospital take care of it. But, through the process of conversations with her, she said, ‘Roxanne, I want to know where my baby was buried’.”

Initially, Tootoosis said that the women came in “like little wilted flowers”. But, they began to blossom as they were given the space to share their stories. “They were just glowing — they were so proud; able to come into their place of honour and recognition.”

Tootoosis felt a personal connection to the women, which she drew on throughout the conversation process. “Having experienced loss in my own family, I would not have [otherwise] known how to support our Indigenous women in their own perinatal loss. [My daughter] taught me how important it was to listen — just letting her tell her story over and over.”

Dr. Caine and Tootoosis hope to see their findings implemented soon in Alberta Health Care policies and practices. “We are fortunate to already have a relationship with the Lois Hole Hospital for Women’s bereavement program,” Dr. Caine says. “I think that when we take our findings back there, it is going to enhance how they serve indigenous women in the program.”

The women’s stories will also be given back to them, as a way to honour and recognize their contributions.

“We often think that it is too hard for the women to talk about [their loss],” Tootoosis noted. “But, it is quite the opposite.”

"Having experienced loss in my own family, I would not have [otherwise] known how to support our Indigenous women in their own perinatal loss. [My daughter] taught me how important it was to listen — just letting her tell her story over and over.”

This important research space will provide the WCHRI team the ability to facilitate research in women's health without impacting the daily clinical care requirements of the hospital. It will also allow clinicians to easily participate and further their clinical research programs which contribute to improving patient care and enhancing the knowledge of all care providers.

Research in this facility will impact women at all stages of their lives. Current studies span reproductive health, mental and stress disorders, ovarian/ gynecologic cancer and mature women's health.