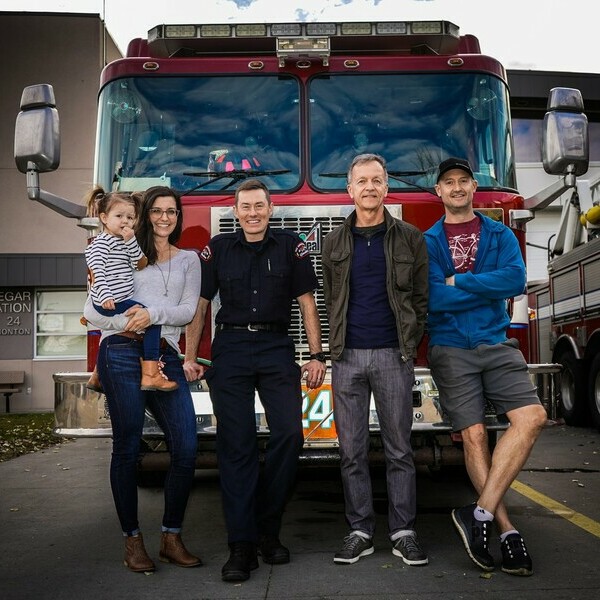 Flat Pete’s trail in the Edmonton river valley, although flat as the name portrays, offers cyclists like Al Betts a flurry of twists and turns that make for an exciting ride. However, on a late summer day in 2018 Betts experienced a little more excitement than he bargained for.

“I was with my buddy in the river valley and we had completed about 25 kilometres of trails and towards the end, I recognized something was off,” said Betts. “We were on Flat Pete’s trail, heading back to our vehicles when my situation worsened.”

After calling 911 for help, Betts was taken to the CK Hui Heart Centre at the Royal Alexandra Hospital where Dr. Aws Alherbish performed an emergency angioplasty that saved Al’s life.

Al's nurse Stephanie was thrilled to see Al recover quickly from the heart incident and resulting treatment. In a unique twist, Stephanie was able to tell him that it was her husband Adam who was part of the Edmonton Fire Station 24 crew that got him to safety at the CK Hui Heart Centre.

This past October, Al had a chance to visit the fire hall and say thank you to the crew and to his CK Hui nurse Stephanie for the great care he received both inside and outside of the hospital.

"These people saved my life," said Betts. "The least I could do was stop by with some donuts and coffee to thank them!"

Al's visit to the fire hall was a welcomed opportunity for the firemen to hear how the rest of Al's care turned out and reflect on the role they each played in keeping him alive.

"It's not often we get to hear how the people we help do after they leave us," said Adam Brimacombe. "Being able to hear from my wife that Al was doing just fine was wonderful. We are all so glad things turned out OK for him."

Betts was thrilled to have the chance not only to thank the fire crew but also to see Stephanie his nurse from the CK Hui once again.

“I am so thankful for the care I received at the CK Hui,” said Betts. “They are an incredibly kind and knowledgeable team that took such great care of me. I owe my life to them and to the donors who support the great work they are doing here.”

Betts’s angioplasty is one of the thousands that happen every year at the CK Hui Heart Centre. Many as part of a scheduled course of treatment for more stable patients, and many that save the lives of patients just like Al.