Our Hospital, Our StoriesEvery Great Love Starts with a Great Story 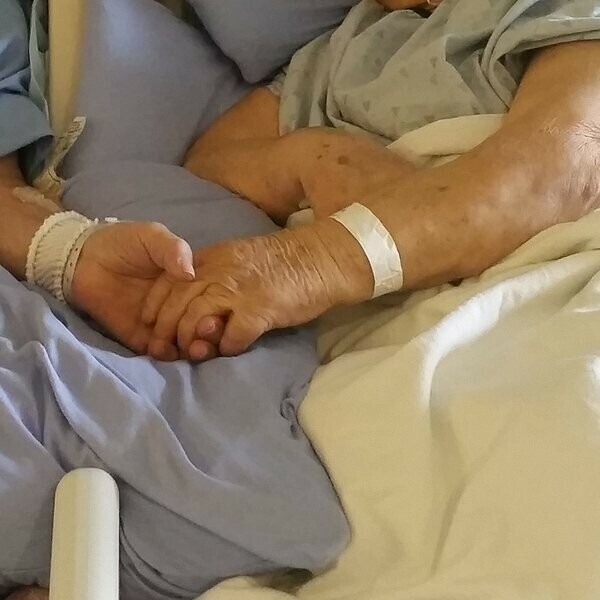 In a world where enduring love has become merely an idea that we see on film, sometimes we are fortunate to see a story that reminds us that such a love still exists.  A quote from the beautiful film The Notebook aptly tells us that “every great love starts with a great story” and the story of Angela and John Molella is just that, a great love story with its closing days spent at Edmonton’s Royal Alexandra Hospital.

After 73 years of marriage and a lifetime of memories, John and Angela Molella spent their final days, hand in hand, in the care of the staff at the Royal Alex.

Their incredible story inspired a video, produced by the hospital and Royal Alexandra Hospital Foundation, in an emotional tribute to how the small acts of caring and kindness make all the difference in the patient experience at the hospital.

The viral video has received much media attention and has been viewed close to a half a million times through Facebook and YouTube and shared over 8,000 times with hundreds of heartfelt comments.

John and Angela Molella met and fell in love in Italy over seven decades ago. In 1959 they relocated to Edmonton where their family  eventually grew to six children, 18 grandchildren and 18 great-grandchildren.

“They didn't believe in public displays of affection, and only after we kids were older did we find out about the love notes my dad sent during the war, and the romantic postcards he sent while in Italy without my mom in the 1980s,” says Angela and John's daughter, Sylvia Molella Parker.

When Angela’s health declined at 91, she was sent to palliative care at the Royal Alexandra Hospital on April 11, 2015 and was told that only days would remain for her. The next day, husband John, 92, fell ill and was rushed to emergency in the same hospital, where their final chapter together would begin. The staff at the Royal Alex recognized the same last name and took the time to investigate the relationship. John was granted a compassionate bed which placed him in the same room as his dying wife Angela.

“We grew up together, and now we're going to die together”, were Angela's heartfelt words spoken in real life and spoken by the husband in the video.

After 10 days together, John passed away on April 22, when Angela was unresponsive and gravely ill. When she awoke her family shared the tragic news and days later hired a private ambulance so she may attend the funeral and say her final goodbyes.

Angela passed away on June 2.

"It would have been absolutely a tragedy if they couldn't have been together in those last moments," said Parker.

“We will never forget the actions and care shown to us by the doctors and nursing staff in Emergency and then Unit 5-East - they became part of our extended family for over a month.”

This touching true story was inspiration for the creation of the video to remind Royal Alex staff of the importance of compassion, empathy and care and the huge impact it makes on patients and families, especially those in palliative care situations.

"It's a reminder of why we went into health care in the first place," said Dr. Curtis Johnston, Co-Facility Medical Director of the Royal Alexandra Hospital, in an interview with CBC News.  "Every health-care professional went into it to make a difference to patients."

The message correlates with the hospital’s strong focus on the patient experience.

“I hope it sends the message that, while this is a hospital where you will receive excellent care, what people truly remember is the caring. The caring way a nurse approached you, spoke to you, looked you in the eye, took the time to hear you, to talk to you,” said Sharlene Rutherford, Vice President of the Royal Alexandra Hospital Foundation.

The Molella family has been extremely touched with the public attention the video and their story has received.

“Even in their dying days, our parents taught us the importance of love and family. We are so proud of the fact they impacted hospital staff to appreciate the difference between care and caring to the point of inspiring a video - what a beautiful legacy of love they have left, along with a learning opportunity for hospital staff. Going that extra mile means the world to the families involved.”

The video, the Difference Between Care and Caring, was the only Canadian finalist and won the award for Best Non Profit Video in the DoGooder National Video Awards and received over 4000 votes! Thank you so much for everyone's support.

The video also received three awards at the ACE (Advertising Club of Edmonton) Awards for Best In Show, Video Production and Not For Profit Broadcast/Video.