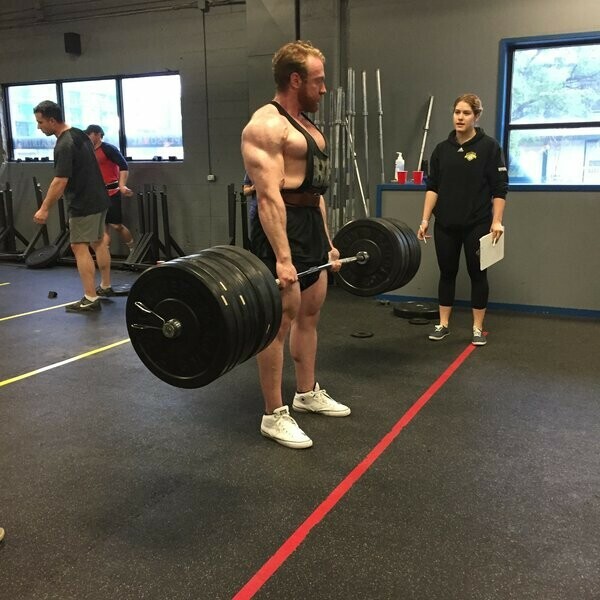 Who’s got the stamina to support Alberta’s only dedicated women’s hospital, the Lois Hole Hospital for Women?  The question was answered by CrossFit athletes in Edmonton who demonstrated strength, control, agility, and stamina at a Feats of Strength Competition hosted by Capital City Athletics.

Athlete Michelle Gardecki, an RN at both the Lois Hole Hospital for Women and the Cross Cancer Institute, with her daughter Indra

And because CrossFit is very much a spectator sport, every available “seat in the house” was taken as audience members enthusiastically showed their appreciation for the stamina and strength that was on display.

Held Saturday, May 13, it was the second straight year that Capital City Athletics held the fundraising event for the Lois Hole Hospital for Women, and organizers were delighted to see numbers, both in terms of participating athletes and folks watching, on the uptake.

Athlete Luca from Popeye's Supplements in the tire flipping event

Organized by Clayton McAdam, founder and head coach of the Capital City Athletics gym, Keith King, and members of the team at Capital City Athletics, the competition included four primary events for both men and women, and was open to all CrossFit athletes from ‘Boxes’ in the surrounding area.

“It’s terrific to see the event continue to grow – we have more athletes this year and the competition is meant to be both serious, but also fun, too,” said King. “After all, it’s supporting a terrific cause and I think everyone feels really good about that – no matter where you place in the competition.”

“There’s a lot of energy in this place – the athletes are amazing and the competitions are really inspiring and motivating to watch,” said Kyle Polanski, a member of the communications team from the Royal Alexandra Hospital Foundation who was on hand to shoot video of the fundraising competition.

See footage from Feats of Strength below.