Our Hospital, Our StoriesClearing the Air

“When I share with people that more women will die of lung cancer, nearly 70%, than breast cancer at 18% they are shocked. After his own lung cancer diagnosis Tim Monds is on a personal mission to spread awareness about the lung cancer causes, and care a 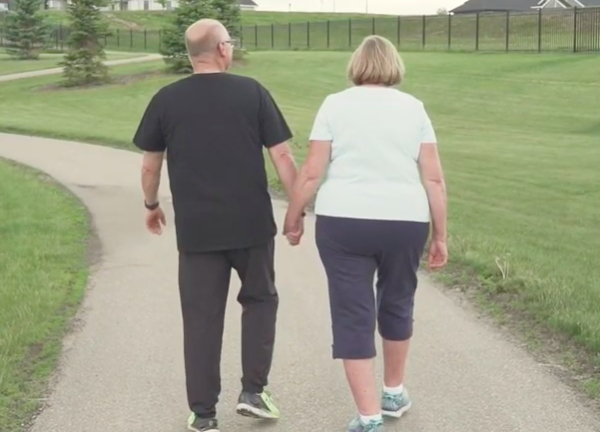 In April of 2016, Tim Monds arrived at the hospital, complaining of pain in his shoulder. “I thought I was having a heart attack,” said Monds. As it turns out, the actual cause of his pain was an even more frightening diagnosis. An x-ray revealed a spot on his lung and further tests confirmed the diagnosis was lung cancer.

Tim was referred to Royal Alexandra Hospital surgeon Dr. Eric Bedard, who removed the diseased section of Monds’ lung, a procedure called a lobectomy. At the time, the hope was that Tim’s lung cancer journey would end with an all-clear after completion.

Unfortunately, two years later, only three weeks after his retirement in 2018, 11 new spots were found on his lungs. Having been diagnosed with lung cancer previously, Tim went back three months later for another scan that confirmed the spots were still there.

Once again, Tim was prepped for surgery. To remove two of the spots identified, Dr. Bedard performed a wedge resection–a procedure where a small, wedge-shaped portion of the lung is removed. It was at this time that Tim was diagnosed with stage four lung cancer.

Nine spots remain on Tim’s lungs and, over the last year, have grown between one and two millimetres; a very positive and unusual rate as typically lung cancer grows much faster.

“They started calling me their atypical, abnormal, unusual patient,” said Monds. “It’s a title that I am quite happy with.”

Tim’s lung cancer journey has taught him a lot. One of the most critical learnings has been a clear lack of awareness and understanding that exists about the disease.

“You can’t have lung cancer, you have never smoked!” is the typical reaction from most. That or the reverse, people wrongfully assuming the diagnosis indicated Monds is a smoker.

“I have never been a smoker, never even tried a cigarette,” said Monds. “I am proof that lung cancer is not solely caused by smoking.”

Cancer is defined as a disease caused by an uncontrolled division of abnormal cells in a part of the body or a malignant growth or tumour resulting from the division of abnormal cells. The definition is significant, proving that anyone can be diagnosed with cancer. There are lifestyle choices that can increase your likelihood of becoming sick, such as smoking can increase the likelihood of a lung cancer diagnosis. Still, it is not limited to these individuals.

It is this reaction and information that prompted Monds and his family to take action. One of those actions resulted in the creation of the Give a Breath Walk/Run in support of lung cancer research.

“I thought, I’m retired, I’ve got time, and I’ve got to do something to support lung cancer and get the message out there,” said Monds. “Every cancer is important and should be funded and supported, but lung cancer seems to have been underfunded and misunderstood for far too long.”

The second annual Give a Breath Walk/Run will be held August 8, 2020. Sign up here to be the first to be notified when registration opens.