Stories of HopeCICW: Our Little Miracle

Canadian Intensive Care Week is October 25-31. Sam Hodgins shares the story of her daughter’s premature birth and resulting 117-day stay in the NICU. Sam wanted to shine a light on the world of “micro-preemies” and give other families hope. 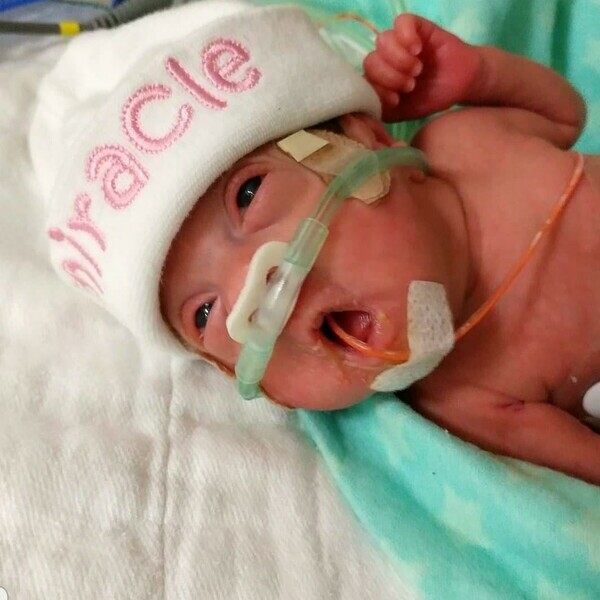 Sam, a self-described “Frenchie” from Montreal who now lives in St. Albert, was pregnant with her first child when the complications began. She was in just her second trimester when she had to leave work to go to the hospital.

“It was September 29th and I started bleeding. We feared we’d already lost our child,” she said. Fortunately, Sam and her husband learned it was a placental tear. Doctors ordered her to take four weeks of bedrest.

Sam went back to work following the bed rest, but the complications continued. She recalls an odd feeling that her baby wanted to come out.

“I thought I was having weird Braxton Hicks pains. I went to the Sturgeon first, but they sent me to the Lois Hole Hospital since it was before the 36-week mark,” said Sam.

It was at the Lois Hole Hospital that a team of doctors and surgeons entered the room to inform Sam she was in labour. They explained that, despite the timing, she was going to give birth.

“I did not believe them. Birth at 23 weeks was impossible,” she said.

They explained the procedures and spoke to her about their options, which included asking if they wanted to put their daughter on life support right away or to hold her once she arrived and monitor the situation. They also asked if Sam and her husband would want to resuscitate their daughter if she had brain damage.

“It was the scariest thing I’ve ever had to do in my life,” she said.

Luckily, little Savanah was a fighter.

Born at 23 weeks and two days, she weighed a mere 1 lb 3 oz. Savanah took her first breath on her own, after which they were able to put her in the incubator.

"They don’t know why it happened. She just decided she wanted to come. She was ready to come into the world."

“The main thing I remember is that her head looked like a kiwi. And she had the biggest ears. So we nicknamed her Kiwi.”

Many nurses and staff came to know ‘Kiwi,’ as Sam and Savanah began a stay in the NICU that lasted 117 days. Sam wanted to share the story of her NICU experience to spread hope.

“When we were there, it felt like it was endless. Day after day, you’re thinking the worst with no end in sight. You have a 1 lb baby and don’t know if they’re going to make it. When you need to talk, the nurses are there for you. You can’t talk to friends and family because they don’t know what you’re going through.”

Sam described the nurses as “extremely sweet” and “very, very, very kind.” Sam appreciated one nurse in particular who was, “quite strict, but straightforward, honest, and very nice.” This nurse “knew what she was doing” and “always, always put baby first. She always made sure my baby was ok.”

Sam’s gratitude also extends to the entire NICU. “Everyone who works there is incredible,” she said. “From the janitors to the doctors. Without them, Savanah wouldn’t be here today.”

In a strange turn of fate, Savanah left the hospital on her original due date, February 23.

While Savanah was on oxygen for the first two months after her discharge, leaving the hospital “felt like a dream,” said Sam. “We were just so excited to be home with her alone, no wires, no monitors. It was a real-life happy ending.”

"We call her our little miracle baby."

Beyond spreading hope, Sam also wanted other families to understand the world of premature births better—a world she did not previously know existed.

Roughly one in every ten births is premature is one fact Sam learned. “Every ounce they gain is important. It’s not the same as a normal birth at all.”

Sam also voiced that families should not despair following premature birth. “Micro-preemies” can often have normal developments, and future pregnancies are still very much possible.

Sam shared that she got pregnant ten months after Savanah and had a very normal birth—a big boy, apparently bigger than his older sister.

And other than requiring injections for her eyes to prevent development-related blindness, Savanah is now “a happy, healthy little girl,” said Sam. While on the petite side, “She’s the most energetic little dinosaur. She likes to roar at people.”

Savanah reportedly also loves animals, swimming, and colouring, especially on Sam and her husband’s walls. “We have a lot of new ‘masterpieces’ in the house,” Sam laughed.

Savanah will be three years old at the end of this October.