Stories With VisionBeyond the Call of Duty

For Constable Jaszczyszyn, like many who work in protection, his job is much more than a nine-to-five role; his job is a huge part of who he is. Learn more about this officer's cancer journey and the doctor who went above and beyond to help. 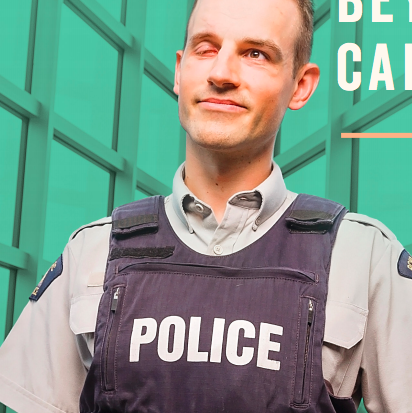 Six years ago, Michael began to have blurred vision in his right eye. Over time, his vision went from blurry to almost completely gone; something was going on.

Michael was eventually referred to the Eye Institute of Alberta at the Royal Alexandra Hospital.

Through further exploration it was identified that Michael had an optic nerve glioma; a rare cancer that is typically a slow-growing tumor. Left untreated, the diagnosis could be fatal.

“The diagnosis was scary. Any time you hear the word tumor, or the word cancer, of course, you would be frightened,” shares Michael in a moment of quiet reflection.

Michael’s diagnosis meant he was placed under the care of Dr. Ezekiel Weis, an ocular oncologist working out of the Eye Institute of Alberta.

“Dr. Weis is a phenomenal doctor,” remembers Michael. “Not only in his skill with medicine but also in his bedside manner. When someone has to tell you that you have cancer, the conversation is never an easy one, yet Dr. Weis made it a little easier to hear.”

“The diagnosis was scary. Any time you hear the word tumor, or the word cancer, of course, you would be frightened.”

On a trip to Ontario to visit family, Michael began to experience incredibly intense headaches This intensifying of symptoms led Michael to seek help while in Ontario. What was discovered was unprecedented; Michael’s tumor had grown exponentially, something no one—including Dr. Weis—could have predicted.

Doctors decided to remove the tumor in its entirety, knowing full well this would mean complete loss of vision in his right eye: a sacrifice Michael was willing to make.

Unprompted, Dr. Weis couriered his medical records and conducted research on the doctors slated to remove the tumor. Dr. Weis was committed to ensuring Michael was in the best hands possible, even if they weren’t his own.

Ultimately, Michael decided to have the surgery in Edmonton at the Royal Alex as a joint surgery performed by Dr. Weis and University of Alberta Neurosurgeon, Dr. David Steinke.

The surgery was a success. Michael was cancer free.

Returning to work after surgery required many adjustments. Losing his dominant eye meant Michael’s life would be different.

Navigating his new reality meant physical challenges: an adjustment in his depth perception, learning to drive with changes to his vision, and retraining himself to shoot left handed are only a few.

"Dr. Weis is a phenomenal doctor. Not only in his skill with medicine but also in his bedside manner. When someone has to tell you that you have cancer, the conversation is never an easy one, yet Dr. Weis made it a little easier to hear.”

While life after surgery brought many challenges and uncertainties, one thing that remained constant was the support Michael found in Dr. Weis.

“Dr. Weis didn’t just tell me I could do it, he stood beside and backed me up when things were uncertain,” remembers Michael.

“He even went as far as writing letters and recommendations to my employer supporting my will to return to operational duties. He provided them with the information they needed to make a decision.

Now thanks to Dr. Weis, I am working on the tactical training unit teaching new officers the skills and abilities I needed to relearn myself.”

In every case, Dr. Ezekiel Weis provided not only care, but caring, for Constable Michael Jaszczyszyn.

Dr. Weis is not alone in his mission to improve patient care at the Eye Institute of Alberta; many staff members and physicians at the Royal Alex continue to go above and beyond the call of duty for their patients each and every day.