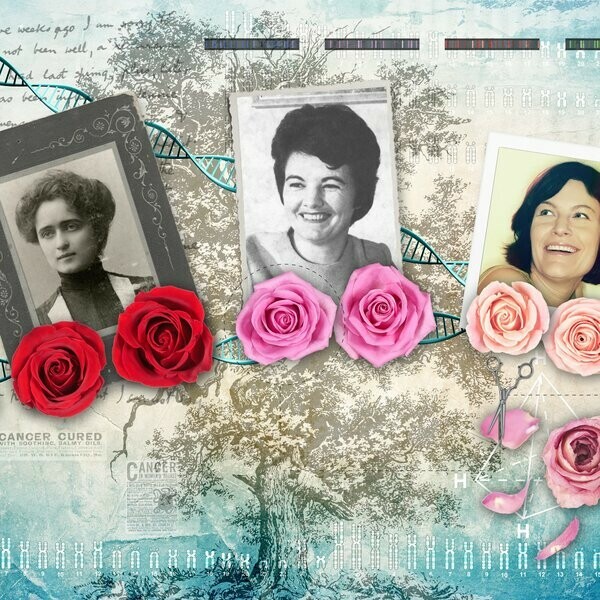 Elisa Warwick-Markowski was 38 weeks pregnant with her second child when she found a lump in her breast. She wasn’t concerned about it, and neither was her obstetrician – breasts go through many changes throughout pregnancy, and most lumps aren’t a problem – but the doctor sent Elisa for bloodwork and an ultrasound, just to be safe. These tests led to a biopsy.

A week later, on a cold Friday in January, her obstetrician called with bad news: the lump was cancerous. The pathology report also indicated the cancer was triple-negative, meaning the cancer cells didn’t contain the estrogen, progesterone or HER2 (human epidermal growth factor) receptors needed for the most common breast cancer therapies to be effective. So instead of hormone-targeting medication, her treatment options were limited to tumour removal followed by chemotherapy and radiation.

“They gave me the weekend to process the news,” Elisa recalls. Her labour was induced on the Monday. Eight days later, she had a lumpectomy to remove the cancer in her breast. Then, with a newborn and a three-year-old at home, she began her cancer treatments: three months of chemotherapy and 30 rounds of radiation over six weeks.

Those few months were a whirlwind of treatment for Elisa, but she didn’t go through it alone: her mother, Elaine, was diagnosed with a rare form of ovarian cancer just a couple of weeks before Elisa’s breast cancer discovery.

“My mom and I had our chemotherapy on the same days,” recalls Elisa.

The mother-daughter cancer discovery prompted the pair to look back at their family history. At this point, they still didn’t know it was hereditary. But based on the rarity of mom Elaine’s cancer and the fact that Elaine’s sister had had breast cancer in her 40s, the mother-daughter pair were referred for genetic testing.

Meanwhile, as Elisa’s sister Shauna Warwick watched her mother and sister cope with chemotherapy and waited for the genetic testing results to come back, she talked about the situation with her doctor, who referred Shauna to the Allard Clinic. “The red flags were there,” Shauna says. “And my physician thought it was prudent to send me to the high-risk clinic,” she says.

The Hereditary Breast and Ovarian Cancer (HBOC) Society says HBOC syndrome “is a genetic predisposition to some types of cancer.” There are several known types of genetic mutations, but the most common are known as BRCA1 and BRCA2.  “All cancer is the result of gene mutations,” says the website, adding that the causes of gene mutations include aging, chemical exposure, hormones or other factors. “The cancers estimated to be hereditary are related to a genetic mutation that exists in every cell of the body, and carriers, whether they’re male or female, have a 50-per-cent chance of passing the mutation onto a child of either gender.

Funded by generous donors, including the Allard Foundation and the HBOC Society, the Allard Hereditary Breast and Ovarian Cancer Clinic, located in the Lois Hole Hospital for Women, follows about 600 patients, just over half of whom have ovarian and breast cancer in their families but have not yet had genetic testing. The Allard Clinic sees patients who have a suspected genetic link and those who have a confirmation.

Dr. Valerie Capstick is a gynecologic oncologist and one of the specialists at the Allard Clinic. She says about five per cent of breast cancers and 10 per cent of ovarian or fallopian tube cancers are caused by hereditary factors (the HBOC Society says this translates into about 1 in 400 women). With a BRCA1 mutation, the risk of breast cancer is in the range of 50 and 85 per cent, whereas the risk of ovarian cancer is generally around 40 per cent. With BRCA2, Capstick says the risks are slightly lower, “but still significantly elevated.” Male carriers of either mutation have an increased risk of getting breast cancer and prostate cancer.

Shauna was the first woman in the family to go to the Allard Clinic. She had her first appointment before she had had any genetic testing done for herself. “At that point when you don’t know, your body feels like a ticking time bomb,” she says. “It does weird things to your head.”

A month after she visited the clinic, Shauna also found a lump in her own breast. She called the clinic on a Friday and secured an appointment for the following Monday. “They were fabulous – very reassuring,” Shauna says. She had an ultrasound on the spot and the results were instantaneous: the lump wasn’t cancer. “If I went through a physician, there would have been a three- or four-week wait for an ultrasound,” she adds.

Four months later, she found another lump and was able to get a biopsy done at the clinic. She had the results in a week. “They know how much stress you’re under,” Shauna says, “and they know their stuff: how this kind of syndrome is different than a generic risk of breast cancer. They know the risk and they treat you accordingly.”

There are five women in the Warwick family. Shauna and her sister Kathleen tested negative for the BRCA1 mutation, while Elisa, sister Christina and their mother all tested positive.

The three BRCA1-positive Warwick women go to the Allard Clinic every six months (Shauna and Kathleen were released from the clinic since their test was negative), and their diagnostic tests alternate between a mammogram and an MRI.

“You don’t want to go back again, but you know you’re being looked after so closely. If there’s anybody who’s going to look after me in this area, it’s those doctors. I trust them completely.”

Capstick says one of the strengths of the Allard Clinic is that it brings together experts in both breast and ovarian cancer to provide dedicated focus in a part of medicine that isn’t universally understood. “It’s a very specialized area,” Capstick says. To capture the expertise under a single roof, breast specialist Dr. Kelly Dabbs spends 20 per cent of her workweek at the Lois Hole Hospital for Women, creating the opportunity to learn together, further establishing best practices.

“A lot of women in the past may have had different messages about what their risks are,” Capstick says. A gynecological oncologist for 25 years, she remembers when the BRCA mutations were first discovered about 20 years ago. “We just seemed to see families it happened in often,” she says. “In my time, I’ve seen the genes responsible discovered, I’ve seen increasing refinements in what we recommend to people.” And Capstick, Dabbs and the team are at the avant-guard of research and treatment.

Those recommendations often centre around preventive surgery: mastectomies and ovary/fallopian tube removal. The decisions made by the patient, though, are deeply personal and often influenced by their own family’s history. “We’re able to give people a percentage chance of getting cancer and everybody interprets that differently,” Capstick explains. “If you watched your mom die of ovarian cancer it’s very likely you’ll want your tubes and ovaries gone. If there has been no ovarian cancer, and lots of breast cancer, chances are you’ll want your breasts gone.”

Some women struggle with the choices, worrying about what their partners will say – particularly when it comes to breast removal – but others approach it straightforwardly, either deciding on a total mastectomy or keeping their breasts and holding to a rigorous screening plan. “Counselling someone in this situation can take more time than somebody who has ovarian cancer,” Capstick says. “It’s hugely complicated and nuanced, and then there’s the overlay of what happened in their families.”

Since breast cancer is typically more treatable than ovarian cancer, many more women opt for a salpingo-oophorectomy (the medical term for fallopian tube and ovary-removal surgery) and choose to closely monitor their breast health. Although ovary and tube removal obviously comes with a side-effect of no longer being able to have children, Capstick says most women start considering the surgery by the time they’re 35 years old, so “they have lots of time” to decide on their families.

The Allard Clinic also has a Menopause Clinic, which Elisa was glad of when she got her ovaries and fallopian tubes removed last year. “I hit menopause cold turkey,” she says. “That’s another struggle you have to go through as a young woman.” But, she adds that the hot flashes and night sweats and continual need to observe her bone health – menopause places Elisa at a higher risk for developing osteoporosis – are a small price to pay for knowing her cancer risk has dropped dramatically.

Once an Allard Clinic patient has had preventive surgeries and her cancer risk is reduced to that of the general population, she is discharged from the facility. Capstick says about 10 per cent of the tube and ovary surgeries reveal a small cancer, which is removed and the patient then treated with chemotherapy.

Since receiving her negative result for BRCA1, Shauna is no longer an Allard Clinic patient. Once Elisa undergoes the bilateral (both sides) mastectomy she’s got planned for later this year, she won’t be, either. All follow-ups will be with Elisa’s family doctor. Mom Elaine, who is in remission from ovarian cancer, will continue to attend the clinic for regular breast cancer screenings.

Elisa says her last appointment at the Allard Clinic will be a bittersweet day. “You don’t want to go back again, but you know you’re being looked after so closely. If there’s anybody who’s going to look after me in this area, it’s those doctors. I trust them completely.”

If you would like to support the important work being done at the Allard Hereditary Breast and Ovarian Cancer Clinic please consider following the link below to donate today.