Our Hospital, Our StoriesAltering Protocal

The opening of the supervised consumption site marked a major step forward in the Royal Alexandra Hospital’s leadership in improving health outcomes for Edmonton’s most vulnerable citizens. 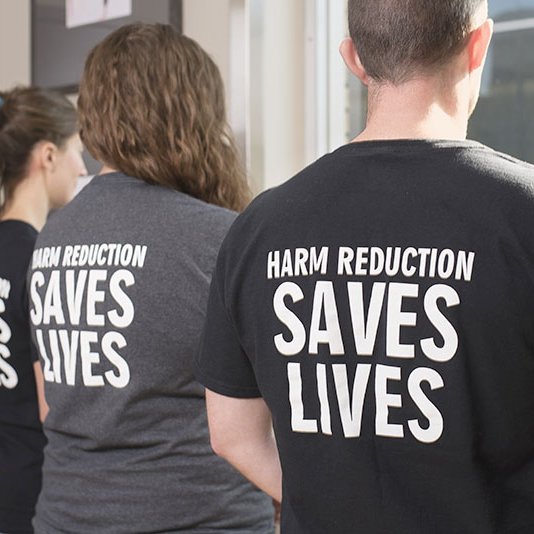 As you enter the supervised consumption site at the Royal Alex— the first of its kind in a hospital in North America—it seems like any other clinic space. But look a little deeper and you will notice a few attributes that make this space one-of-a-kind.

As the double doors to the clinic swing open, patients feel safe, they are entering a space that is free of judgement. A friendly smile from one of the clinicians welcomes each patient as they enter. A few steps further and safes are available for patients to securely store belongings, including any drugs they have. The medical supplies that fill cabinets are the harm reduction kits that are provided for patient use.

To the left, there’s a room that offers patients a safe and somewhat private area to make their injections. To the right, there’s a comfortable area for patients to rest while staff ensure they are in no danger of overdose or other immediate adverse reactions after their drug use.

The opening of the supervised consumption site marked a major step forward in the Royal Alexandra Hospital’s leadership in improving health outcomes for Edmonton’s most vulnerable citizens.

“Our second patient to use the clinic when it opened was so thankful to our nurses for providing what he called ‘a safe space that was so needed’,” says Robert Terry, unit manager of the clinic. “When he left that day he stopped and shook each of the nurses’ hands.”

The supervised consumption site is based on a harm reduction model of care that operates with the goal to reduce the adverse health, social and economic consequences for drug users, their families and communities, without requiring them to stop or decrease their drug use.

“Drug use, particularly injection drug use, puts people at risk of overdose death. The supervised consumption site was created to ensure we can avoid more loss of life,” Terry says. “People who use drugs are not disposable.”

It was generous donor support that funded the Royal Alexandra Hospital’s shift to a new model of care for Edmonton’s most vulnerable citizens four years ago with the creation of the Inner City Health and Wellness Program.

This important first step was the beginning of a path forward to the evidence-based harm-reduction services that people struggling with substance use disorders deserve.

Since its opening in April, the supervised consumption site has had more than 500 visits. The site is open for patients 24 hours a day, seven days a week and is able to serve six patients at a time.

“Building connections and trust is the first step in being able to provide a patient with the support they need. The space provides another opportunity to connect with patients who are the most vulnerable and marginalized in our city,” says Terry. “If they are looking for help to reduce or eliminate their drug use we can offer help with that as well, but the focus in the space is on harm reduction, not abstinence.”

“We have created an environment where patients feel comfortable, safe and supported, something that every patient in our hospital deserves. They are human beings just like you and me. They are someone’s son, daughter, brother, sister or parent. They matter.”