Stories of HopeA Month of Gratitude

At the Royal Alexandra Hospital Foundation, we are always in the mood to say thank you, but there is no time of year that is truer than the month of November during our Giving Tuesday campaign. 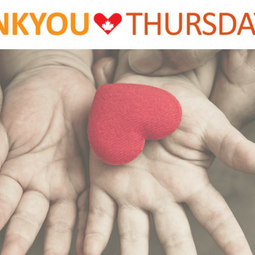 The team at the Royal Alexandra Hospital Foundation always has something to be thankful for, our donors.

The month of November brings with it an extra special feeling of gratitude. The Thursday that follows the chaos of Black Friday, the online frenzy of Cyber Monday and the patronage of Giving Tuesday is known across the country as Thankful Thursday.

This year the Royal Alexandra Hospital Foundation once again focused its efforts on fundraising for Pregnancy Pathways, a unique partnership of 25 local organizations aimed at addressing the unmet housing and support service needs of women who are homeless and pregnant, and who are also in many cases struggling with addictions and mental health issues.

Every year in Edmonton approximately 100 homeless, pregnant and parenting women are in desperate need of housing, health and social supports and the Pregnancy Pathways initiative will soon be set to open its doors and begin the journey of reducing that number over time from 100 to none.

The campaign, a predominantly social media-driven effort once again saw resounding success. With thousands of social media post views and shares both awareness and important funds were raised.

“Give every child a chance. #100toNone #GivingTuesdayCa”

The foundation’s month-long Giving Tuesday campaign built upon the success of the same effort one year prior to the tune of more than $187,000 raised for the program between the two campaigns.

The commitment offered by the two foundations gave donors to the Royal Alexandra Hospital Foundation the comfort of knowing each and every dollar they donated would be matched, doubling their gift and the impact their contribution would have.

"My grandma Florence Lede was very passionate about supporting women and children and when we learned about the Pregnancy Pathways initiative we felt that not only was it a really great fit, it is also a cause that will truly change women’s lives, and the lives of their children."

Marla Lede-Bruder, Executive Director of the two Lede family foundations shared with us why they chose to lend their support and what it means to her personally as a mother of two herself.

A most sincere message of gratitude to all donors who have supported the Pregnancy Pathways initiative both this year and last; today and every day we are thankful for your support. Your donations will make a true difference in the lives of mothers and their children in our city for years to come.