“The staff of the CK Hui were smart and helpful. If you had a question, they had the answer and if they didn’t have the answer, they didn’t try to make it up, they took the time to find the right answer for you. Everyone was fantastic." 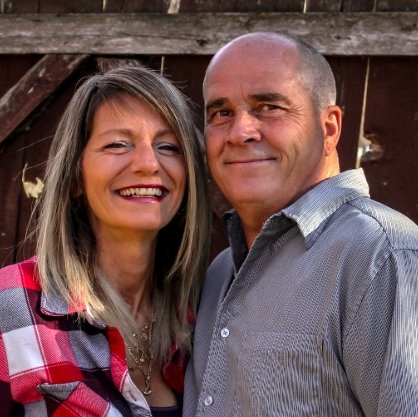 Darrell Moore, a happy-go-lucky 55-year-old truck driver from Edmonton, drove his big rig and made his deliveries to customers around central Alberta.

Every day he would drive his routes and return home to his wife.

One day while driving, Darrell started having chest pains.

Hoping they would go away, he drove on. After some time passed the pain became so severe that he decided to pull his semi-truck over and call an ambulance.

“My chest was hurting pretty badly,” said Moore. “It hurt a little bit the month before on and off, but nothing like that. Something wasn’t right.”

As he waited anxiously on the side of the road an ambulance was dispatched from Athabasca. When it arrived, he was taken to the local airport where he was airlifted by helicopter to the CK Hui Heart Centre in Edmonton.

Though in pain, Moore stayed conscious. He was told he had suffered a heart attack.

“Once I got in the ambulance, they gave me a clot-buster shot, and my pain went from a nine to a one in about 10 minutes.”

Darrell’s wife, Diane, recalls the ordeal. “He phoned me and told me not to panic. So of course, you panic.”

“I didn’t know he had suffered a heart attack. There were all these people, nurses and doctors and orderlies all around him. It was pretty scary. Once they said he would be ok, I calmed down.”

“The staff of the CK Hui were smart and helpful. If you had a question, they had the answer and if they didn’t have the answer, they didn’t try to make it up, they took the time to find the right answer for you.”

“Even the support staff that brought him his food were pleasant and so kind.  I was really impressed. We kept a list of everybody’s names. We remembered everyone.”

Three days after being admitted to CK Hui, Darrell had surgery to have stents inserted in his artery. Stents help keep coronary arteries open and reduce the chance of a heart attack.

Debbie Mears, the Cardiac Intensive Care Unit Manager at the CK Hui Heart Centre, was there when Darrell was admitted, and also when he returned with little gift baskets addressed to each of the staff who provided such wonderful care during his stay.

“Darrell’s case is not uncommon. We do about 6,500 angiograms a year, where they inject dye so they’re able to see a picture of the heart on a screen,” explained Mears. “The dye shows where the blood-flow should be going, so if it stops they can tell where there’s a blockage.”

“We also do about 2,500 angioplasties a year; a procedure that uses a wire to blow up a small balloon in order to open up the vessel where blockages are found. Sometimes a stent is placed to keep the vessel open.  And in this case, he did get a stent.”

“The staff here understand how much fear is involved for patients,” Mears continued.  “The teaching in this unit just goes on and on. The day nurse, the night nurse, the pharmacist, everyone works together to inform and teach the patient and their family about new lifestyle choices, medications, and ideas for diet.  They do it in a way that everyone feels relaxed and open to new ideas.”

After the stents were inserted, Moore was released, although he hasn’t been cleared to go back to work yet.  “I’m not allowed to drive a big truck for three months,” he said.

“You can say thank-you as many times as you want.  But a little appreciation goes a long way,” Moore said. “It was important to us that the staff knew how much we appreciated each and every one of them.”

The CK Hui Heart Centre saves thousands of lives each year. Heart disease is the second leading cause of death in Canada.

Chances are someone you love – maybe even you yourself – will someday face heart disease.  Support the CK Hui Heart Centre today and help shape care for the future.