Stories With HeartA Gift of Gratitude

Grateful patient Dan Henderson and his wife Kelly return to say thank you in a special way to the incredible staff at the CK Hui Heart Centre. 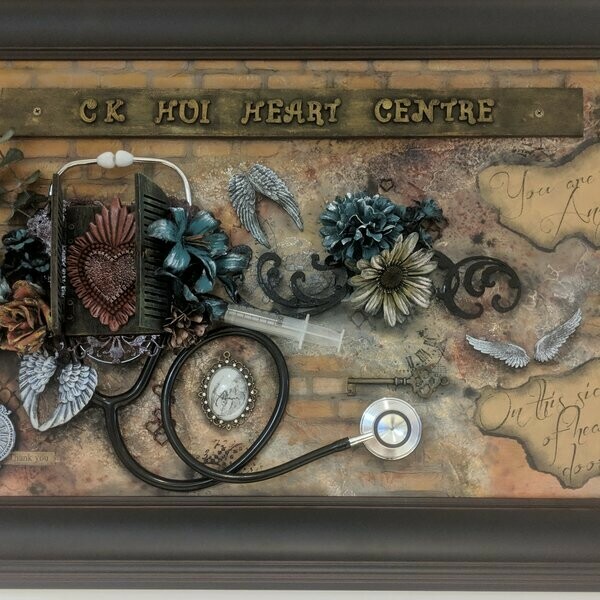 Dan Henderson, a 57-year-old Fleet Maintenance Planner from Fort McMurray, had planned to run the 10 km race during the Edmonton Marathon this past summer, but at the last moment changed his mind and decided to take on the longer and more challenging half marathon instead.

“What’s the worst that could happen?” his wife Kelly remembers thinking.

The couple woke up early in Spruce Grove the morning of the marathon, had breakfast, and drove to the starting line. With Kelly positioned at the finish line he hit the trail.

Dan remembers passing through several residential neighbourhoods and was on track to complete his race around 10:00 a.m.

Dan didn’t make it to the finish line.

Finally, her phone rang.  It was the Emergency Department at the Royal Alexandra Hospital. Dan had collapsed and had been taken to the hospital by ambulance.

When she arrived, doctors had already put Dan into a medically-induced coma to reduce the stress on his brain. Only later did they learn that Dan’s life had been saved by two bystanders in the crowd, one a doctor and one a dental student, who noticed him face-down on a curb and had rushed over to perform CPR.

It was at this moment that Kelly’s life turned upside down. She spent the next 11 days by Dan’s side, first waiting for him to be brought back to consciousness, and later, as they waited for his triple bypass surgery at the Mazankowski Alberta Heart Institute.

“The doctors and nurses at the CK Hui Heart Centre were extremely comforting, complete with hugs,” said Henderson. “The nurses were all very chatty and upbeat, but they didn’t overpromise. One of them even shared her supper with me. That extra personal touch everyone showed made all the difference.”

“The doctors and nurses at the CK Hui Heart Centre were extremely comforting, complete with hugs. The nurses were all very chatty and upbeat, but they didn’t overpromise. One of them even shared her supper with me. That extra personal touch everyone showed made all the difference.”

“He had a lot of blockages, so he was with us for a while until we could stabilize him. He was placed in a medically induced coma and we cooled his body to about 33 degrees Celsius," said Mears. "This ‘brain cooling’ protocol is a procedure we began offering in 2012 and countless lives, including Dan’s, have been saved because of it.”

Dan and Kelly have recently returned to the CK Hui to present a gift to the staff members they say "are the angels on this side of heavens door". Kelly created a piece of art that represents their time at the hospital and their appreciation for the staff, many of whom were there to welcome them on their emotional return.

“The clock is to signify they time you gave back to us. The stethoscope is obvious. The door is to signify the phrase that you are the angels on this side of Heaven’s door. The brick wall was the wall that I stared at from the back waiting area. The photo in the locket is a copy of Dan’s angiogram that was captured while he was there. The date of the event is represented in the graffiti type. The angel wings are the amazing staff at the CK Hui Heart Centre. They key is to represent good health and the dragonfly is my signature.” Kelly Henderson, grateful wife of Dan Henderson, patient of the CK Hui Heart Centre.

“For them, it was a very personal experience.  They remembered names and made gifts for individual nurses, the floor cleaner, and the woman that delivered food trays.  They wanted to say thank-you," Mears said.

“These guys just step up.  They do what they’ve got to do,” said Mears. “When they’re here, they're totally engaged. If I ever had to be a patient and woke up with these guys standing around me that would be my version of heaven.”